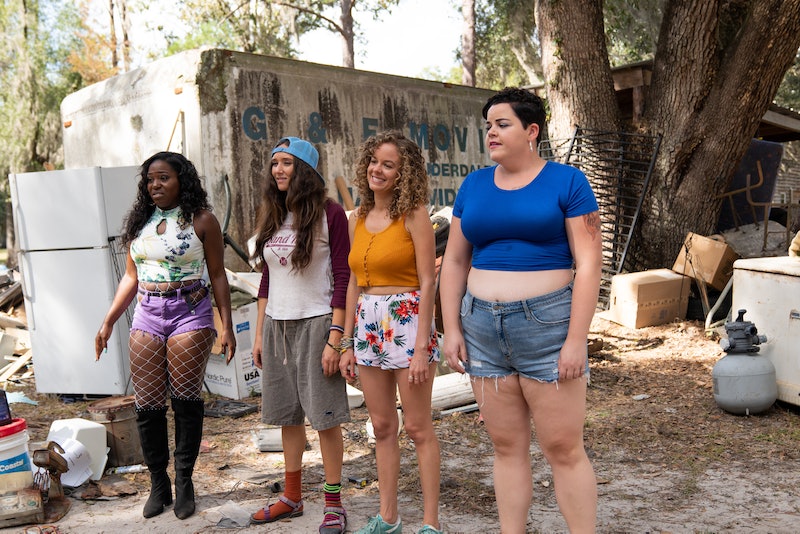 After a strong freshman run, Florida Girls airs its Season 1 finale on Wednesday. So far, the Pop series has been beloved by critics and fans alike. But despite all that buzz, unfortunately, there's no word yet if Florida Girls will return for Season 2.

Season 1 followed four high school dropouts — Shelby, Kaitlin, Jayla, and Erica — trying to scrape by and still have a good time. Watching Mandy, their much more ambitious friend, leave the only home they've ever known caused them to do some self-reflection, with Shelby even deciding to get her GED. According to Deadline, the show was inspired by series creator Laura Chinn's life. "I grew up in Florida and have always wanted to share my wildly fun and truly insane experiences in a state that is so much more than just: Florida Man on Bath Salts Head-Butts Car, Slaps Fire Chief," she told the outlet in 2018.

Thanks to Chinn, Florida Girls has been able to tackle the realities of living below the poverty line in a comedic way — and without making its characters the punchline. "Every step of the way we were very careful and cautious, in terms of wanting to make sure that the message we were trying to get out was correct," Chinn told CBS in July. "When you're talking about race, poverty, and women's rights, it's very sensitive. I wanted to make sure our point of view was on the right side of things."

And that she did. It will be a difficult wait for renewal news, but in the meantime, here are seven similar shows to fill the Florida Girls-shaped void.

This TNT series stars Niecy Nash, Scrubs veteran Judy Reyes, and Carrie Preston as women working at a nail salon in Central Florida. However, there's more to Nail Artisans than meets the eye — Desna Simms (Nash) launders money through the business, thus bringing her employees into the world of organized crime. Chaos, of course, ensues.

Chinn cited both Ilana Glazer and Abbi Jacobson as influences during an interview with CBS. And speaking the The Wrap, she said, "These girls are a little rougher around the edges than the Broad City girls, but I think underneath they really do love each other and are a family. They're not going to break each other's hearts or f*ck each other over."

PEN15 is a cringe-inducing comedy with a heart of gold. Its creators, Maya Erskine and Anna Konkle, star as '90s middle schoolers trying to survive the traumas of puberty. It premiered on Hulu in early 2019 to positive reviews, with Season 2 set to premiere next year. If you ever wanted to see someone perform a long monologue from Ace Ventura: Pet Detective, go on a hunger strike to solve racism, improvise a timpani solo in the middle of a band concert, or chat with someone named Flymiamibro22 on AIM, PEN15 is for you.

Based on the Lindy West memoir, Shrill stars SNL fixture Aidy Bryant as a struggling journalist named Annie. Episode 4, in which the self-conscious protagonist attends a body-inclusive pool party, is a highlight.

Chinn used to write for The Mick before creating her show, so Florida Girls shares some DNA with the Fox series.

Although this NBC gem mostly takes place in the afterlife, Florida jokes still abound. Jason Mendoza (Manny Jacinto) is a DJ and breakdancer from Florida, whose interests include the Jacksonville Jaguars and Blake Bortles. And while Jason once revealed that his high school was just a collection of tug boats tied together, he's also a huge sweetheart whose unbridled enthusiasm for Florida is contagious.

'On Becoming a God in Central Florida'

In On Becoming a God In Central Florida, Kirsten Dunst plays Krystal Stubbs, who is described by Showtime as "a minimum-wage water park employee who lies, schemes, and cons her way up the ranks of Founders American Merchandise (FAM) — the cultish, flag-waving, multibillion-dollar pyramid scheme that drove her family to ruin in the first place." The series premieres Sunday, Aug. 25, on Showtime, so it'll be here a lot sooner than any potential Florida Girls Season 2. And even if the show doesn't return (knock on wood), there are clearly plenty of other comedies to keep its fans occupied.