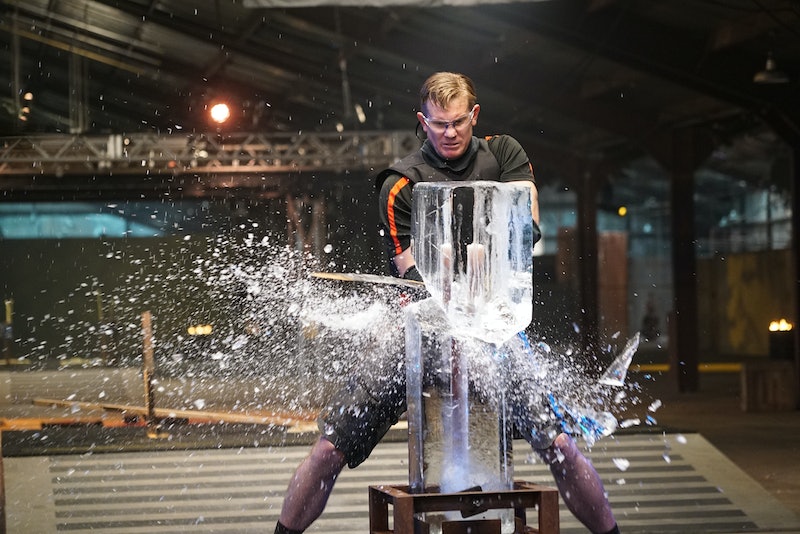 On Thursday, Forged in Fire: Knife or Death fans will finally get to see which former contestant will take home the $20,000 prize. But as exciting as it will be to see things come to a head, you may have to ride that high of excitement for quite some time. The season finale also means the show is over, and it's not yet clear if Forged in Fire: Knife or Death will return for Season 3.

That being said, the show has been well-received by critics like Margaret Lyons at the New York Times, who called it "the best kind of good-bad there is." So while it may not be the buzziest show on television, that kind of good word of mouth certainly can't hurt. It's also a one-of-a-kind concept with some one-of-a-kind contestants, which has to count for something.

"What I like about [Knife or Death] is that everyone is different," host (and former WWE fighter) Bill Goldberg told TV Insider. "Every blade is different. Every story is different. It takes all kinds to come out and complete. Not one blade and not one person with the background is going to be the end-all that is going to win all of them. There are always variables."

Unfortunately, there's not anything out there quite like Knife or Death (except, of course, the original Forged in Fire), but these five shows should tide you over while you wait for renewal news.

This Netflix show offers a behind-the-scenes look at the unique art form of glassblowing, featuring glassblowers of different expertise levels competing against each other in a variety of challenges.

OK, so this show is much more calm and kind-spirited than Knife or Death, but if a show about craftmanship is what you're after, then Making It may fit the bill. It's also hosted by Parks and Recreation alums Amy Poehler and Nick Offerman, who each received Emmy nominations for their roles. Crafts, comedy, and awards prestige? Yes please.

Where to watch: NBC

If you've never seen this bonkers NBC series, which features athletes trying to complete a truly ridiculous obstacle course in front of a live audience, you're sorely missing out. And not only does it have 11 seasons to marathon, there are also numerous spinoffs including Team Ninja Warrior, Ninja vs. Ninja, and American Ninja Warrior Junior.

Where to watch: NBC, streaming on Hulu

Vice called Hyperdrive "the best show you're not yet watching," and they may be right. Season 1 featured a truck driver, model, construction worker, lumberjack, delivery driver, law student, and millionaire taking on ridiculous driving courses — think Knife or Death, but for cars.

This Netflix show forces its contestants to stay awake for an entire 24 hours while completing challenges in order to win a million dollars. Yes, that is the real description. If you're craving weird but wonderful, look no further.

Hopefully by the time you make it through all of those, Knife or Death will be back for Season 3.

More like this
Love Island’s Latest Winter Season Finally Has A US Release Date
By Grace Wehniainen
Susie Wrote About Choosing "Sun Not Shade" After Clayton & Rachel's 'Bachelor' TikTok
By Grace Wehniainen
Erika Jayne's Estranged Husband Tom Girardi Has Been Indicted On Fraud Charges
By Jake Viswanath
'RHOSLC’s Heather & Whitney Are Still On A “Friendship Break” After Season 3 Reunion
By Jake Viswanath
Get Even More From Bustle — Sign Up For The Newsletter
From hair trends to relationship advice, our daily newsletter has everything you need to sound like a person who’s on TikTok, even if you aren’t.