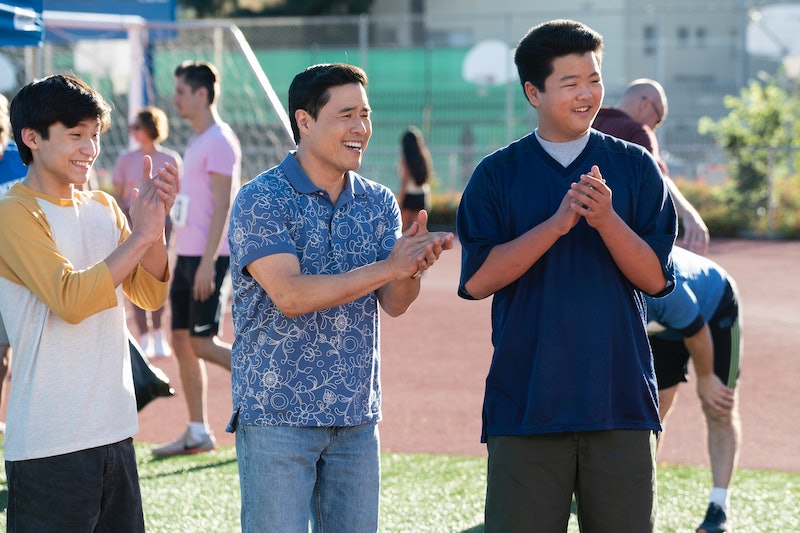 With the Season 5 finale airing Friday, April 12, fans are likely eager to know if Fresh Off the Boat will return for Season 6. Unfortunately, there's been no renewal news yet, and there's already been one major change announced: due to her move from 20th Century Fox to Universal Television, FOTB creator Nahnatchka Khan will be stepping down as showrunner, per Variety. Still, that doesn't mean it's the end of the road for the groundbreaking comedy.

Update: Fresh Off the Boat has been renewed for Season 6, TVLine reported.

Earlier: Season 5 covered a lot of narrative ground for the Huang family, including Jessica's unsuccessful book launch, a new Chinese family moving into the neighborhood, and Honey's surprise second pregnancy. Eddie, meanwhile, did a ton of growing up — physically and developmentally. He got so tall that when he visited Taiwan during a cultural exchange program, he was referred to as "an escaped giant from the Chinese basketball factory," and he also got his driver's license this season — much to Jessica's horror.

And FOTB is growing up, too. In fact, the series recently celebrated its 100th episode, "Under the Taipei Sun," which aired on April 5. "I never thought I'd be on a show that would hit 100 episodes," Randall Park, who plays Louis Huang, told the LAist. "I mean, that's kind of the dream." According to the publication, FOTB is the longest-running Asian-led series ever. In fact, a 2017 study found that, although there are now more opportunities for Asian-American actors, they still only make up 4.3% of show regulars alongside Pacific Islanders, while white actors make up 69.5% of regulars.

Furthermore, the study found out that one third of the characters played by Asian or Asian-Americans actors appear on just 11 shows. At the time, these were Marco Polo (canceled), Dr. Ken (canceled), Master of None, Fresh Off the Boat, The Man in the High Castle, (ending after its fourth season, per Deadline), Hawaii Five-0, The Night Of, Wrecked (which appears to have been canceled, per a Feb. 2019 tweet from the showrunner, Zach Cregger), Recovery Road (canceled), Truth Be Told (canceled), and Hell on Wheels (canceled).

That's reason enough to keep FOTB going. But even if the show doesn't come back, Khan is proud of what they have accomplished. As she wrote in an op-ed for Entertainment Tonight in April:

"We've been able to show an audience a television family who looks like them and reflects their experiences. And we've also shown an audience a family they might not have known in their everyday lives, but whose struggles they can relate to because they are universal and specific at the same time. We've shown the immigrant experience, dealt with racism (casual and not), the influence of hip-hop culture, assimilation, the pressure of representation, choosing your American name, the idea that some New Year's don’t happen in January, Success Perms, Lao Ban Santas, Melrose Place, Stephen King, the American dream and the Asian Flush. The list goes on."

And whether or not FOTB is renewed, it's paved the way for other projects like it. "Our show helped open a door that's been pushed open even further by the shows and movies that have come after us, and will be thrown open even wider by the stories that have yet to be told," Kahn wrote.

Hopefully, the Huang's story will continue, but either way, FOTB won't be soon forgotten.