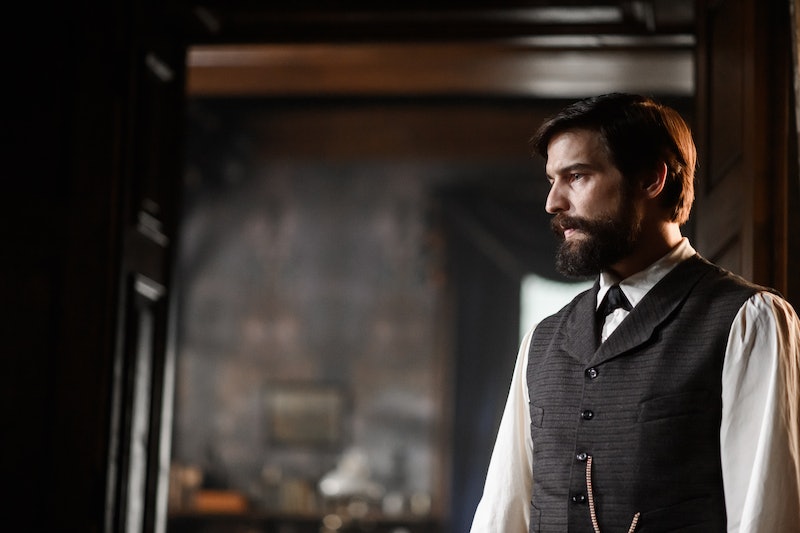 Netflix's Freud takes the psychoanalyst we all learned about in school and puts a totally new spin on him. The series follows a young Sigmund Freud just emerging into the psychoanalysis sphere in 1880s Vienna, Austria where he uses his skills to help uncover a murder conspiracy. The detective aspect is fictional, the character is real, and the whole thing is a completely weird series filled with twists that will shock viewers in the best way. It's no wonder that fans are already clamoring for a Freud Season 2.

The series only just hit Netflix on March 23, but it aired in early March on the Austrian channel ORF. Even as coronavirus coverage began to overtake the airwaves, over 400,000 viewers were tuning in for the Freud episodes. It's also performed well on the Austrian awards circuit, picking up Romy Academy Award nominations for Best TV Series and Best Production TV Fiction. Netflix doesn't release its viewing stats to the public, but when Decider ran a Twitter poll of over 500 people, over 70 percent agreed that the series was worth watching.

It's one of those shows that's so bonkers you don't see any of it coming. The Guardian praised the show for leaning into its ludicrous side and described it as a "ridiculous 'historical' fiction thriller which recasts the legendary psychologist as a coked-up, seance-enthused witch hunter who uses hypnosis to solve crimes in 19th-century Vienna. Because …why not?" Why not is right.

Director Marvin Kren told Variety that he wanted to "appeal to young and modern audiences," hence all the twists and turns in this wild, dark show. "We try to subvert their expectations from time to time," he said. "We try to reward those who enjoy the unexpected and watching the show you will see modern and provocative elements mixed in with the historical." The risks he took seem to have paid off, with The Cinemaholic praising the series for being "edgy" and "groundbreaking."

The praise the series has received bodes well for it returning to Netflix for a second season. Since the first season neatly wraps up the main mystery, future episodes will have to expand into a new conspiracy to solve. But that's certainly possible, given that the show is only at the start of Freud's life and has plenty of room to grow and invent. Actor Robert Finster, who plays the titular Freud, told an Austrian media outlet that he couldn't say anything either way about a potential Season 2, and instead he asked people to just watch Season 1 first. Well, people have, and they want more.

However, it may be a while before more episodes can be filmed if Netflix does renew the series. Currently production on many Netflix shows is suspended pending the end of the coronavirus pandemic. If things continue to remain shut down for a while, that could delay a second season. Usually Netflix shows air a year apart, which would bring Season 2 about in March 2021, but delays could push it closer to summer 2021 or beyond. But as long as everyone is on board to do more, and to keep it just as ridiculous, wild, and unpredictable as Season 1, audiences will likely tune in no matter when more episodes hit Netflix.