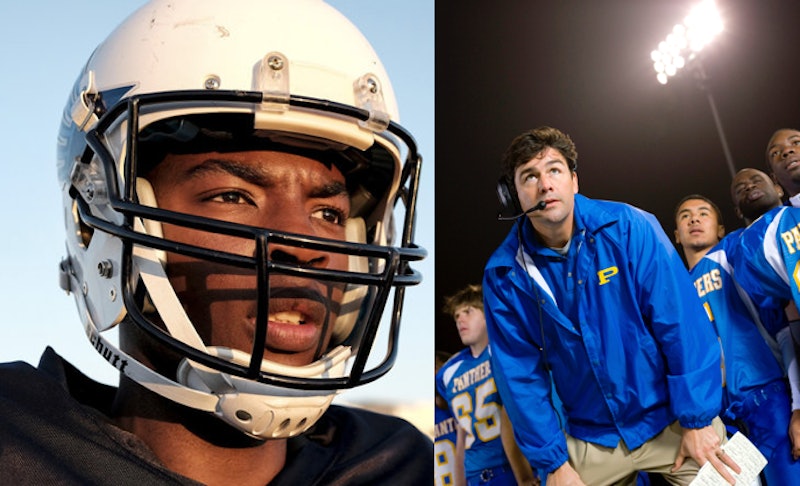 Mild spoilers ahead for the first three episodes of All American. Ever since it debuted in 2006, Friday Night Lights has felt like the epitome of high school football drama on television. Its place at the top of that genre probably isn't going to be dismantled anytime soon, but that doesn't mean there aren't plenty of worthy newcomers who deserve just as much attention. The CW is the latest network to try its hand at a show with a similar premise, and it's got all the ingredients it needs to be the next best thing. Friday Night Lights fans will enjoy All American for its similar vibe, at least as far as the actual game of football goes, but they'll also get plenty of interesting plotlines that the former was never really equipped to deliver.

All American follows the journey of a black teenager named Spencer James (Daniel Ezra), a character based on the real-life former NFL player Spencer Paysinger, who grows up in a rough part of Los Angeles. He's an asset to his school's football team, but the violent environment combined with an opposing school's coach (Taye Diggs) who claims he can find success elsewhere prompts a transfer to the much wealthier Beverly Hills High School.

This places Spencer in a position which makes him an outsider in more ways than one. He doesn't quite fit in with the kids at his new school, nor does he necessarily always want to — their casual jokes about gang violence and their cavalier attitude toward police solidify how out of touch they can be. But his friends back home aren't thrilled with him either; They feel like he's thinks he's better than them and that he's abandoned their team to schmooze with the upper class. Right off the bat, All American opens up a whole lot of doors that Friday Night Lights never really even knocked on.

It's apparent from the get-go that All American is planning on digging into Spencer's relationships with the people around him to pick apart racial bias, class bias, and how different peoples' upbringings can be, even among those who might look similar or come from the same city. It feels deeper, more curious and more of this moment than a lot of other shows on TV today do.

All American tackles those hard topics while still seamlessly integrating storylines viewers look for in teen-centric dramas — best friends keeping secrets from each other, budding romances hitting roadblocks, disputes with parents reaching a boiling point. Even these expected storylines offer welcome surprises and refreshing perspectives — stereotypical flirtations between the popular girl and the star football player are explored, but a fledgling romance between two black lesbian women also takes center stage for a chunk of Episode 3.

If you liked the core aspects of Friday Night Lights — the gameday excitement, the bond between teammates, the high school popularity warfare and the somber coach trying to hold everyone together — you'll enjoy All American. And that's not to say that's all Friday Night Lights was, either — its narrative presented viewers with tough questions, too. Its gut-wrenching turns and tear-jerking developments were just as resonant. But it premiered over a decade ago, was set in a rural Texas town, and featured a largely white cast. It's obviously not going to have the same message that a 2018 look at Los Angeles teenagers does, but then again, maybe it was never trying to.

Every show like All American is going to draw the inevitable comparison to Friday Night Lights purely just because of the icon status the latter became. But perhaps we shouldn't compare too much, despite the shows' few shared themes. All American can stand on its own two feet, as its own gripping entity. It does so without reminding you of any other show, wrapping you in its storytelling so you're focused completely on the characters at hand. Even if it'll attract a lot of the same fans, All American is much more than just something to fill a Friday Night Lights-shaped hole in your TV lineup. It's not pretending to be anything it's not, and it doesn't have to — it's a compelling, entertaining, poignant story all its own.