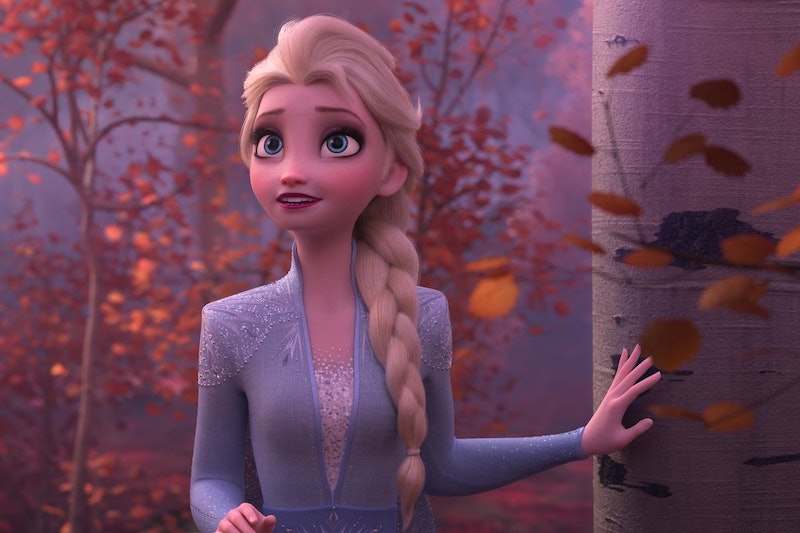 Plump your sofa cushions, grab a bowl of popcorn, and dim the lights, because Disney + finally lands on UK shores on March 24 just in time for some serious social distancing — and let's face it, lighthearted content is top of the queue right now. The much anticipated streaming platform arrives with more than 500 movies, more than 360 TV series and 36 very exclusive Disney + originals. Yet, with all the hype surrounding the latest streaming competitor, it begs the question, will Frozen 2 be available on Disney+ UK?

It seems UK fans will have to wait a little longer to watch the second part to Snow Queen Elsa's magical story. Disney released its full list of programming earlier today and only the original blockbuster, Frozen, was listed from the franchise. Although, signs say Frozen 2 could also be released in the UK soon. On Twitter, Disney announced it would be releasing the famous sequel to it US, Australian and Netherlands platforms early on March 14 — call it an uplifting treat during the coronavirus quarantine. The original date was set for June 26.

Bustle UK has reached out to Disney + bosses to confirm when Frozen 2 will be available on the UK platform. Fingers crossed it'll be during peak staying-at-home time.

Until then, Disney + doesn't look like it will disappoint fans. Subscribers can look forward to 30 Marvel films including Captain Marvel, Black Panther, and Guardians of the Galaxy and over 50 Marvel series including “Marvel’s Agents of S.H.I.E.L.D” and “Marvel’s Runaways.” There's also plenty of Disney, Pixar, Marvel, Star Wars, and National Geographic content too.

All the Disney classics are available, such as Cinderella and Little Mermaid, not to mention the new-school re-boots, such as 2019's The Lion King. So, lot's of musical numbers to sing-a-long too (and annoy the neighbour with). You can find Bustle's suggestions of what to stream on Disney+ here.

Fans can currently subscribe to Disney+ for the introductory price of £49.99. The pre-launch offer for the annual subscription is only available until March 23rd 2020 (so act quick), and is equivalent to £4.17 per month. Subscribers will be able to stream Disney+ on nearly all major mobile and connected TV devices at launch, including gaming consoles, streaming media players, and smart TVs.