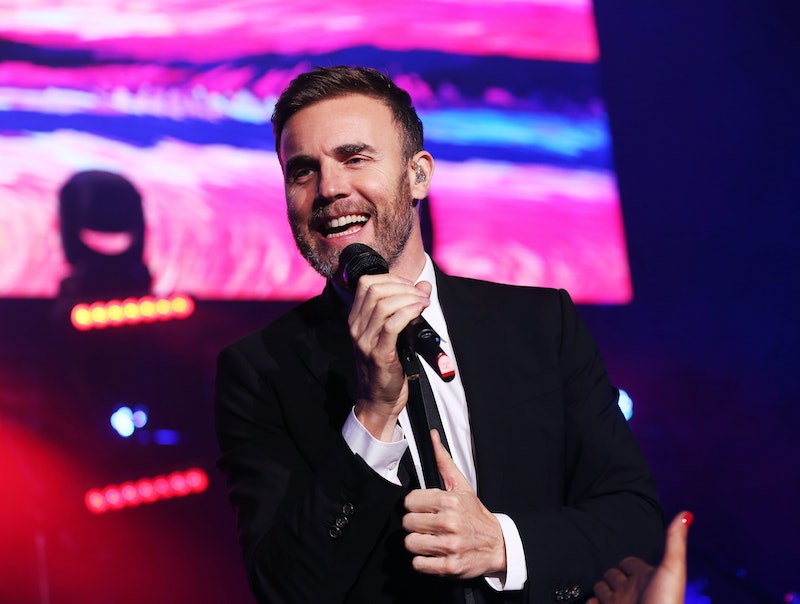 Following the chart success of their 2018 album Odyssey, it's clear that appetite for all things Take That is still going strong. And after a somewhat ambiguous social media post, there could be a lot in store for fans of the iconic band, because Gary Barlow himself has confirmed new solo music is on the way. The singer also confirmed that he has a "plan" for the next couple of years — which has left some fans wondering if an accompanying tour might also be in the pipeline. But will Gary Barlow tour the UK in 2020?

As it stands, there has been no official announcement in regards to a Gary Barlow tour in 2020. I have reached out to the singer's representatives for comment, and will update with any new information the minute it becomes available.

As reported by Digital Spy, speculation surrounding a potential 2020 tour tour first emerged after several social media posts made by the "Shine" singer. In the posts, Barlow revealed that he was "happy to announce a new solo record for the Autumn of 2020," and went on to add that he has "a plan or the next couple of years." Now, this isn't exactly confirmation, but its not unusual a singer backs up a new release with a follow-up tour — so fingers crossed we get an announcement soon.

According to Hello! Magazine, the Take That star previously discussed his upcoming projects back in August. In the post, Barlow expressed his love for writing music, and revealed that new music is very much "on the go." Speaking on Instagram, the "Never Forget" singer said, "I’m out of my suits and back in the studio today. I’ve got so much new music on the go. Some of it is specific to projects I’m involved in. Some of it is just me, writing what’s in my mind and heart. I’m never worried about where my music ends up. It will find a home. Sometimes years later songs I’ve written come back in play. There’s no timing to why and where music comes from. The important thing is to just get it out. I love writing so much!"

As reported by the BBC, Barlow's upcoming 2020 solo record will be his first project since the release of Take That's 2018 album, Odyessy. The record was released back in 2018, and quickly became the fastest selling album of the year after shifting an impressive 106,000 copies during its first week. The album, which became the band's eighth chart-topper, featured re-imagined versions of their classic hits — as well as three new tracks titled "Out of Our Heads," "Spin," and "Everlasting."

Following the success of Odyssey, Take That expressed their gratitude to long-time fans. Speaking to the Official Charts, the band said in a statement, "We’re so grateful to all our fans who have been out and bought the album. What a way to celebrate our 30th anniversary! It really is incredible and it means so much to us."

So, although nothing has been confirmed, a Gary Barlow tour could very well be on its way next year, and I already can't wait to get my hands on some tickets.