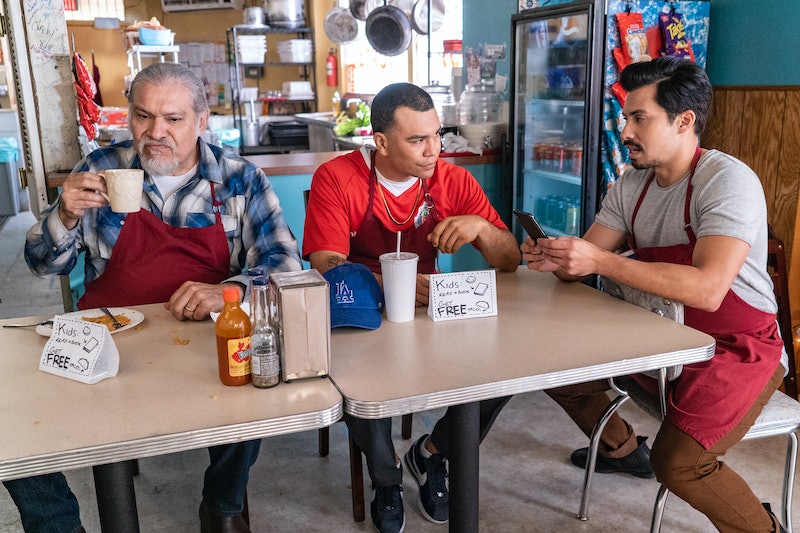 Spoilers ahead for Gentefied Season 1. Season 1 ended with obvious cliffhangers for several characters, so it's no surprise that Netflix has renewed Gentefied for Season 2. The show tells the story of a rapidly gentrifying Boyle Heights, where Chris, Erik, and Ana Morales are all faced with a difficult decision that puts them at the crossroads of their community and their dreams: do they stay true to their roots or look beyond the neighborhood for something more?

Chris was educated in Idaho and dreams of becoming a Michelin-starred chef. He's proud of his heritage, but his peers accuse him of whitewashing Boyle Heights when he updates Mama Fina's, the taco shop his grandpa runs, to appeal to a more middle-class, white aesthetic to pay off their overdue rent. Erik is a rough-around-the-edges man who's deeply invested in staying in Boyle Heights, but after his Stanford-bound love, Lidia, challenges him to be more at her level, he dives headlong into feminist podcasts and the works of Alexandre Dumas and Nietzsche. And Ana communicates her love for her heritage and community through her art, but when a white real estate investor plucks her out of obscurity, she's faced with deciding whether chasing her dream is worth knowing that she's contributing to the slow death of the very place her art pays homage to. All the while, Pop is struggling to ask his grandkids for help keeping Mama Fina afloat amidst all of the changes in the neighborhood.

These tensions coil tighter and finally break loose in the final episode, leaving a lot left to resolve in Season 2.

Chris is set up as the point-of-view outsider of the tale, a character who appears to have one foot in two different worlds. Though Chris clearly loves his cousins and grandfather Pop, the other characters continuously remind Chris that he's not really welcomed in their community, viewing him as part of the problem that plagues their district.

Chris, Erik, and Pop manage to come together as a team for the LA Weekly food tour, but in the last episode Chris begins to worry that taking over Mama Fina's, rather than pursuing cooking in Paris, means he's settling for an unremarkable (and possibly unprofitable) life. Like many of the characters, Chris is caught between family and his own aspirations, and in the final moments his father offers him an out by paying for cooking school. In Season 2, will Chris leave for Paris? And will he ever finally get truly acknowledged as truly Mexican, rather than the "coconut" he's continuously derided as?

Erik is at first set up as a perfect foil to Chris: full of machismo, disdainful of Chris' education, and dedicated to Los Angeles to the point where he's never dreamed of having a life outside Pop's taqueria. After it becomes clear that Lidia plans to attend Stanford, Erik cleans up his act. He despises the real estate agents who are slowly parceling away their community for fancy ramen shops and expensive condos, but he also wants Mama Fina's to survive. He begins working with Chris to innovate and update the restaurant. His determination to help Pop even leads to a questionable decision: purposefully acting like a Mexican stereotype in order to lure white customers to their door.

In the last episode, Lidia goes into labor, and as they hold their daughter, she asks Erik to come with her to Stanford.

As a literal starving artist, Ana's relationship to gentrification is as complex as Chris' is. Outspoken and liberal, Ana and her girlfriend Yessika rail against the changing fabric of their home, but Ana is unable to deny that to provide for her family, she essentially needs to "sell out." Her identities as a Mexican and a proud queer woman are constantly putting her in the cross-hairs. When she's commissioned to paint a mural of two luchadores making out, for example, she's ecstatic until she endures homophobic slurs, and her art becomes viewed by her community as a symbol of gentrification.

Things come to a head for Ana when Yessika and their friends protest outside of Mama Fina's during the food tour. Ana and Yessika break up, and this segues into Ana's art show, where her benefactor repeatedly tokenizes her by telling investors about her poor seamstress mother and (often incorrect) heritage. Ana learns through an investor that Mama Fina's was purchased out from under Pop, and the woman wants to commission her to create a mural for her new experimental food pop-up. Ana flips out, defaces her own art, and stomps out. (The investors, of course, think it's performance art and clap.)

Ana has to tell Pop and the others about the shop eventually, but will they hold her at fault in any way? Ana seemed to think she helped to attract her investor's friends to Boyle Heights. Furthermore, will Ana and Yessika make up?

This doesn't even get into questions of how they will help Pop now that he's in Immigration and Customs Enforcement custody, and if he'll be deported or manage to get out. And what will become of the family if the restaurant is sold? With all these lead ins, Season 2 has plenty of material to dive into head first.

This article was originally published on Feb. 21, 2020