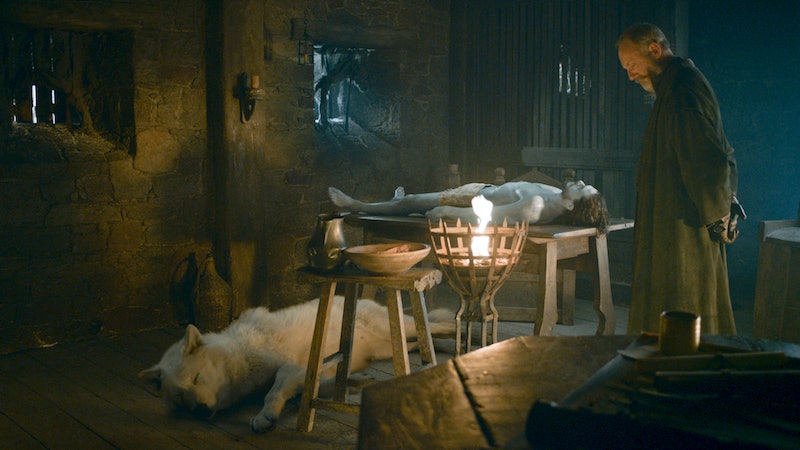 The direwolf population is dwindling in Westeros, but two of the litter have managed to survive. Arya's fierce fighter Nymeria is leading a pack, and Jon's companion Ghost is... somewhere. It's actually been a while since we've Ghost on Game of Thrones. So where is that big pup? A likely guess would be Winterfell, but there has been little evidence in Season 7 to prove that.

In Season 6, Ghost was present when Jon Snow popped back up from being dead. He left Castle Black with Jon, Sansa, Davos, and Melisandre. He does not participate in the Battle of the Bastards, but does presumably move in to Winterfell when House Stark reclaims it.

Ghost wasn't part of the entourage when the King in the North went to Dragonstone, was he? It's hard to imagine a direwolf would have sea legs. Game of Thrones writer and producer Byran Cogman tweeted that there was meant to be a scene between Jon Snow and Ghost in Episode 2, "Stormborn," which must have been a goodbye before Jon boarded his ship to visit Daenerys — but it at least seems to confirm that Ghost is alive and well in Winterfell.

Unless he got on that boat too, it's safe to assume that Ghost has taken up in the kennels that Ramsay Bolton's hounds used to occupy.

The two "brothers" have been separated before and everything has still turned out alright for them. For example, Ghost and Jon spent some time apart while he was an undercover wildling and met Ygritte. Could the distance between them now be foreshadowing for his relationship with Daenerys? Every time he leaves his dog behind, Jon seems to find a new girlfriend and a new battle to fight in. It's definitely something to think about.

All in all, Ghost's absence shouldn't be cause for too much concern, though it is a bummer that the direwolf likely won't meet a dragon for some time to come. The significance of the direwolves to the Starks is still a little bit of a mystery on Game of Thrones and it's unclear how their fates align.. Some, like Sansa and Bran, survived without theirs for ages, but others, like Rickon and Robb, did not have the same luck. Arya, too, is separated from her direwolf at a time when she might need her most. Although the direwolves play a larger part in the books, the series tends to show them only sparingly given how much it costs to CGI them into existence. So Ghost's whereabouts might have nothing at all to do with the narrative and everything to do with Game of Thrones' budget. Fans can get a battle or a wolf — but not both, it seems.

For now, there is still a lot of possibility that Ghost returns before the story comes to an end. Maybe Bran can warg into Ghost to help with whatever is to come. Or maybe Jon's massive pet can be the one to take out Littlefinger. Cersei's into poison murders now, and Sansa could make murder by dog her signature move. Whatever it is, fans will be keeping a close eye on Ghost, wherever he is, with great interest.