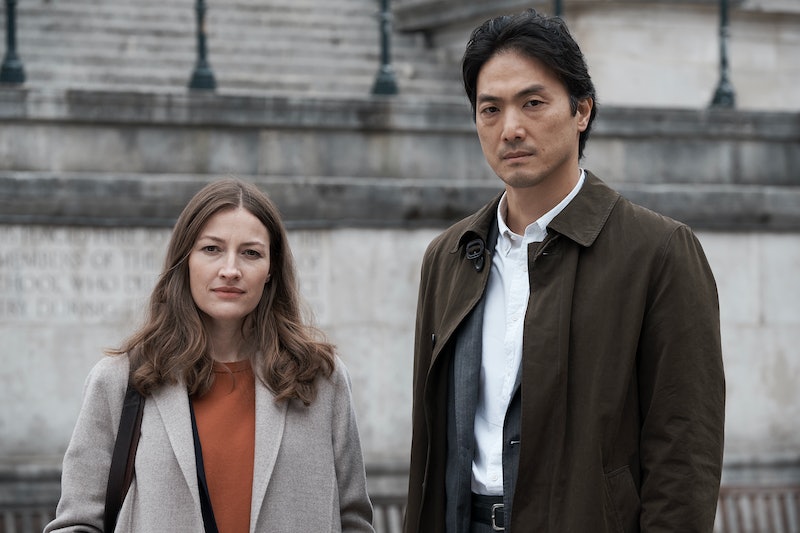 The new Netflix crime thriller Giri/Haji (Duty/Shame), from the producers behind HBO's Emmy-winning Chernobyl, is actually fantastically surreal. Full of artistic narrative choices and moving performances, Joe Barton's show was a sleeper hit in Britain when it was released late last year, and now it's on Netflix for everyone to enjoy. Though there's currently no news if Giri/Haji will return for Season 2, it's clear by the widespread acclaim that there's definitely an avid audience for a renewal.

Giri/Haji at first appears to have a very straightforward, almost generic, plot: it follows Kenzo Moru (Takehiro Hira), a Tokyo detective who travels to London looking for his wayward Yakuza brother Yuto (Yosuke Kubozuka), who's accused of murdering a Japanese businessman. Along the way Kenzo teams up with police officer DC Sarah Weitzmann (Kelly Macdonald), charismatic rent boy Rodney (Will Sharpe), and even his own rebellious daughter Taki (Aoi Okuyama). Their unlikely partnership forms the core of the series as tensions between warring Yakuza factions bubble over and threaten to consume them all.

Giri/Haji sounds like any old crime drama, but the reality is that Barton's creation is like a breath of fresh air, a show unafraid to play around with its narrative formats, even if that clashes with the normal conventions of the crime genre. Gerard Gilbert at the Independent wrote that Giri/Haji is "stylistically bold without ever being overbearingly arty, with animated catch-up sequences, a judicious use of split-screen, theatrical rain showers, and even, at one climactic moment, a gunfight that turns balletic."

Patrick Cremona at Radio Times agreed, writing that Giri/Haji is "refreshing" for being unafraid to interweave non-English dialogue into the show — notably, the first 25 minutes of the entire series takes place entirely in Japanese. Echoing Bong Joon-Ho's recent Golden Globes message about how subtitles are viewed as a barrier, Cremona wrote that "it’s hard to shake the feeling that sections of the viewing public are still resistant to subtitled drama – but there’s no shortage of Japanese dialogue on show in Giri/Haji, which unquestionably adds a certain authenticity to proceedings."

It's clear that Giri/Haji was a favorite among British critics last year. Michael Hogan at The Telegraph called Giri/Haji "no ordinary crime drama" since it's "bewitched and beguiled for the past seven weeks." Hogan praised the show's "bravura performances" and boldly called the show "an unexpected triumph – up there with Chernobyl, The Virtues and Succession as the year’s best TV drama."

The show also won over a ton of fans, with BBC viewers taking to Twitter to express support for the surprisingly moving little show.

"Giri/Haji kept you watching because you had absolutely no idea in which direction it was headed but were very willing to find out," David Stubbs wrote for The Guardian. "Exquisite touches included the use of animation as a means of exposition – a method also used in 2018’s Black Earth Rising. Giri/Haji deserved a lot more watercooler conversation than it got."

The show was Stubbs' pick for the "unsung gem of 2019," and thankfully, now the rest of the world can sit down and enjoy Giri/Haji too — even if it does end up just being a one season miniseries.