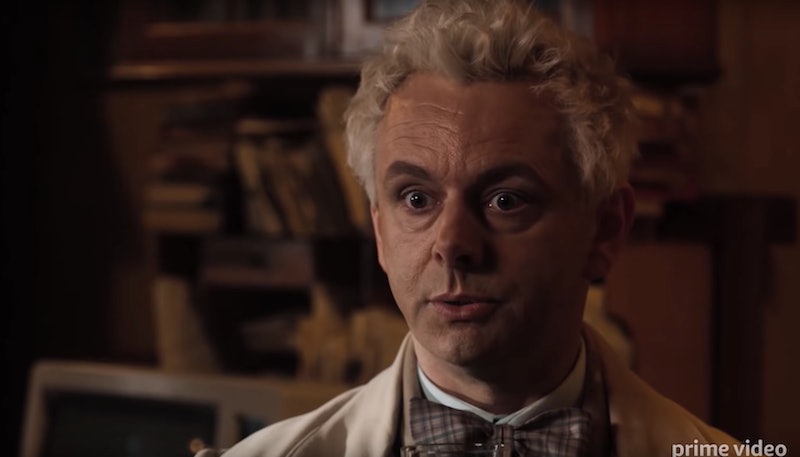 It was the best of times. It was the worst of times. And then it was the... end of times? That's the premise surrounding Neil Gaiman’s new Amazon show Good Omens, which stars Michael Sheen and David Tennant as two unlikely allies who team up to save the world from the apocalypse by tracking down the Antichrist and rerouting fate. But as tantalizing as that may sound, don't get too attached, as it's unlikely that Good Omens will return for Season 2.

Firstly, the project has been billed as a miniseries, which means it's intended to be a limited release. And while no, that hasn't stopped other shows from coming back (hi, Big Little Lies), Good Omens creator Neil Gaiman been pretty clear that he doesn't intend the show to return. When asked about the potential of future seasons at SXSW in March, he told reporters that a second installment isn't in the works right now and he doesn't expect for that to change anytime soon. "The lovely thing about Good Omens is it has a beginning, it has a middle, and it has an end," Gaiman said, according to Radio Times. "Season 1 of Good Omens is Good Omens. It's brilliant. It finishes. You have six episodes and we're done. We won't try to build in all these things to try to let it continue indefinitely."

Based on Gaiman's adamant response to the question, it seems pointless to hope for more episodes down the line. But then again, you never know for sure. If the show goes on to be successful enough (and why wouldn't it, with the likes of Sheen and Tennant?), it's possible Gaiman could have a change of heart and revisit the possibility of continuing the story.

The series is based on Gaiman and Terry Pratchett's 1990 novel of the same name and poses a question no one would ever think to ask: what if an angel and a demon joined forces to prevent the end of days? From the trailer alone, Sheen and Tennant's chemistry together is off the charts, which becomes even more prominent and layered as the season progresses. As reported by Entertainment Weekly, the series will also feature "scenes set in The Garden of Eden, another with Aziraphale (Sheen) and Crowley (Tennant) inspiring William Shakespeare (sort of), and a scene introducing Jon Hamm as Aziraphale's oblivious blowhard boss, the Archangel Gabriel."

Needless to say, it's completely understandable to not want to say goodbye to this show so quickly. After all, if the final season of Game of Thrones has taught us anything, it's that six episodes of a season isn't nearly enough to satisfy viewers. (And that's coming from a show that already had seven seasons under its belt.)

Alas, Gaiman's mind appears to be made up on the matter, so don't expect these characters to be back for another go-around. The chances that Good Omens will return are very, very slim, which means you'll have to satiate every last second of the show once it hits Amazon.

More like this
'Bridgerton' S3 Teases Exciting Social Season For Penelope Featherington
By Bustle
'Wakanda Forever' Is Already Opening Doors For Mabel Cadena
By Grace Wehniainen
Will 'The Walking Dead' Return For Season 12?
By Grace Wehniainen
A 'Grey's Anatomy' Alum Will Join Negan & Maggie's 'Walking Dead' Spinoff
By Alyssa Lapid
Get Even More From Bustle — Sign Up For The Newsletter