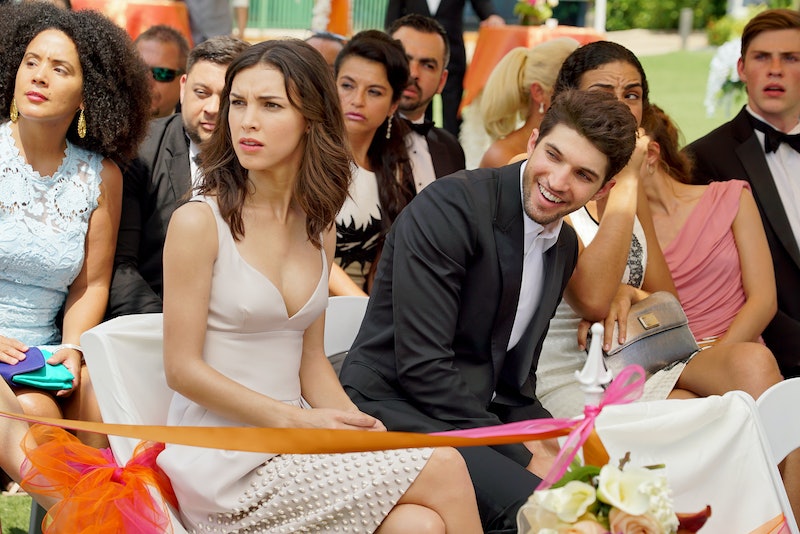 From the beginning, Grand Hotel has been billed as a fun summer show full of over-the-top drama and lots of scandalous hookups. So, it's only natural to expect that if Grand Hotel returns for Season 2, it will be filled with even more over-the-top drama and scandalous hookups. Unfortunately, it doesn't like like a decision about whether or not the show will continue has been made yet.

According to Deadline, Karey Burke, ABC's president of entertainment, said in August that the future of Grand Hotel would be decided after the entire first season has aired. "We're going to wait until the end of its run," she said. "It's a show we like a lot. It's a show that I wish the ratings were a bit stronger but we'll make that decision after its run."

That, uh, doesn't exactly sound promising, and the numbers don't seem to be helping. As reported by Variety, Grand Hotel's June premiere brought in low ratings, nabbing only 3.7 million viewers. That may sound like a lot, but compared to the 5.5 million viewers who turned into the The Bachelorette — which aired just before Grand Hotel and heavily promoted it during commercials — it's paltry. Variety also noted that other ABC shows that opened to similar ratings — like The Fix and Whiskey Cavalier — were later canceled. Considering that, per The Wrap, Grand Hotel's penultimate had 2.4 million viewers, things aren't looking up. That being said, the ratings aren't so low that it would be impossible for the show to come back, and fans on Twitter are hopeful. They know a decision has yet to be made and have been pleading with ABC to keep it around.

Actor Bryan Craig, who plays Javi, has also posted about wanting the show to be renewed, and Denyse Tontz, who plays Alicia, has retweeted posts from fans who want the show to return.

Grand Hotel is all about secrets and twists, so a second season could give fans another mystery (or mysteries) to piece together next summer, especially since a murder mystery was "the engine for Season 1," as Grand Hotel producer, director, and guest star Eva Longoria told Entertainment Weekly. The show is based on Gran Hotel, a Spanish series, which she described as "Spain's answer to Downton Abbey," because unlike Grand Hotel, it's set in the early 20th century. As for the American show, Longoria says the Miami setting means "the show looks like an Instagram feed." Sounds perfect for summer, right? Like both the original series and Downton Abbey, Grand Hotel also highlights the contrast between hotel workers and wealthy owners, as well as plenty of conflicts between family members.

Since it's not clear exactly when fans will find out if the show is renewed, for now, they'll just have to keep hoping. Well that, and also enjoy the season finale. It's time to find out what really happened to Skye and see where allegiances lie. Fingers crossed it's not the end.