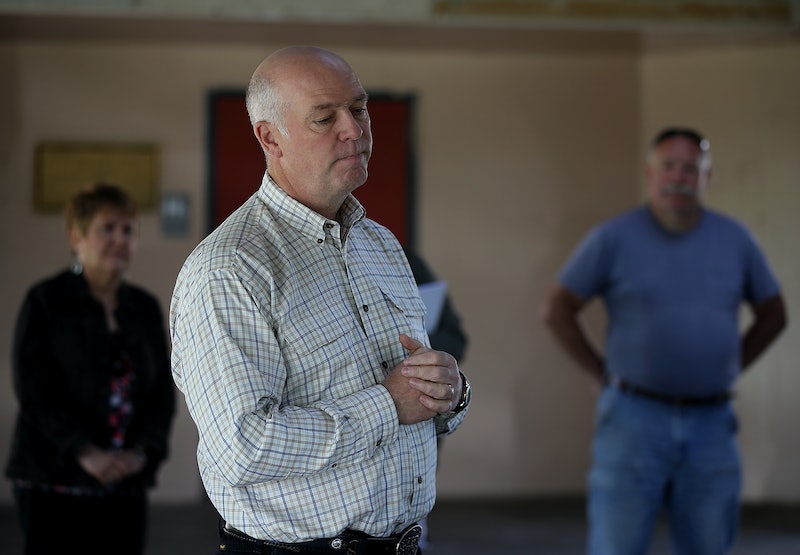 American political races are known for being messy. Attack ads and invented scandals don't raise many eyebrows, but a House special election race in Montana reached a new level on Wednesday night. The Republican congressional candidate Greg Gianforte was charged with misdemeanor assault after he allegedly attacked a journalist from The Guardian. So will Gianforte leave the Montana congressional race? Before the incident, he had a 8-point lead.

To get to what happened Wednesday, you have to hear all sides. The journalist, Ben Jacobs, described it as a "body-slam."

"He took me to the ground,” Jacobs told The Guardian. “I think he wailed on me once or twice. ... He got on me and I think he hit me. ... This is the strangest thing that has ever happened to me in reporting on politics."

That is not the same version that the Gianforte campaign offered. Campaign spokesman Shane Scanlon blamed Jacobs, saying that the reporter had entered a private meeting.

"The Guardian's Ben Jacobs entered the office without permission, aggressively shoved a recorder in Greg's face, and began asking badgering questions," Scanlon said in a statement. "Greg then attempted to grab the phone that was pushed in his face. Jacobs grabbed Greg's wrist, and spun away from Greg, pushing them both to the ground."

That does not match the accounts from other journalists at the scene. Reporters from organizations as varied as Fox News and Buzzfeed detailed a version that more closely matches Jacobs' account. Alicia Acuna of Fox News wrote a firsthand report of what she allegedly saw:

Gianforte grabbed Jacobs by the neck with both hands and slammed him into the ground behind him. Faith, Keith and I watched in disbelief as Gianforte then began punching the reporter. As Gianforte moved on top of Jacobs, he began yelling something to the effect of, "I'm sick and tired of this!"

Sheriff Brian Gootkin, who had previously donated to the Gianforte campaign, found enough evidence to move ahead and charge Gianforte.

"Following multiple interviews and an investigation by the Gallatin County Sheriff’s Office it was determined there was probable cause to issue a citation to Greg Gianforte for misdemeanor assault," Gootkin said in a statement. "The nature of the injuries did not meet the statutory elements of felony assault."

Before this incident, it was seen as likely that Gianforte would win the race easily. Polls earlier in May showed a lead of some 8 points, with the distance separating Gianforte from the Democratic candidate, Rob Quist. The likelihood of a last-minute shake-up is limited because of Montana's early voting.