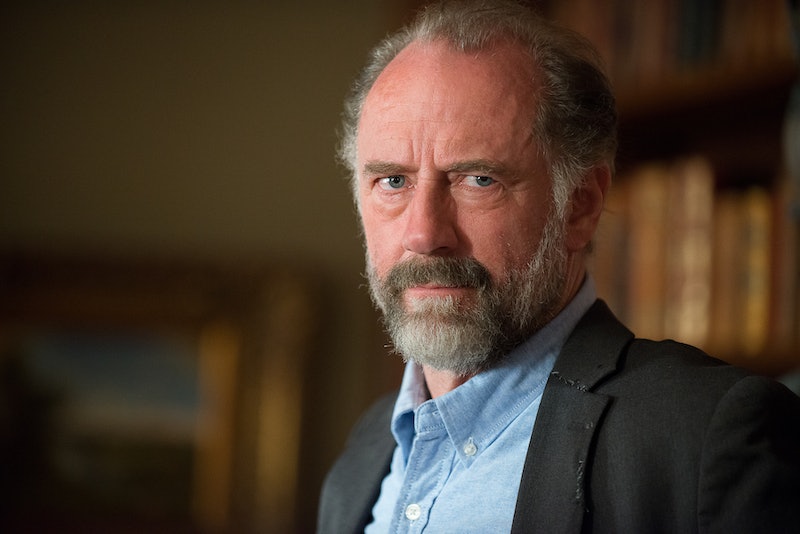 He might not be as bad as Negan, but Maggie has got another villain to deal with. As she is recovering at the Hilltop, Maggie has to interact with the colony's leader Gregory on The Walking Dead. Although you would have expected him to possess even just a basic level of competency or decency since he runs a pretty successful town in the zombie apocalypse, the Nov. 20 episode, "Go Getters," proved otherwise. So what's his deal? Let's recap what The Walking Dead has shown viewers so far about Gregory and what you should expect from him based on the comics. *Warning comic book spoilers follow.

Gregory didn't leave a great impression in Season 6 when he got stabbed by his own people, let Rick and Maggie solve his Negan problems for him, and showed what a sexist creep he is. And his first appearance in Season 7 proved that impression was 100 percent accurate. While I can see being frustrated and scared that Rick's group made matters worse with Negan, he had a better idea of the threat Negan posed when he agreed to the deal that Maggie proposed back in Season 6 where they would eliminate Negan and his people in exchange for some of the Hilltop's supplies.

Now that Maggie and Sasha are in distress and need Gregory's help, the coward not only wants nothing to do with them, but he also tried to give them up to the Savior named Simon. Not to mention he continued his misogynist ways — remembering women's names when you're trying to force yourself sexually on them must be so confusing! So how the hell did this loser (I could come up with a more mature term, but he doesn't deserve it) become leader? As the much more competent and moral Jesus noted, Gregory was the leader when he got to the Hilltop and Jesus just assumed he was selected for some reason. And unfortunately, the comics don't really offer any additional insight into Gregory's ascent to power.

As for how Gregory's TV trajectory matches his comic book counterpart, it's pretty much spot-on. Although in the comics he has been mostly dealing with Rick at this point, all of the other details are pretty accurate. His relationship with Maggie does pick up in the comics and ultimately leads to his demise because, as the show has been hinting at, Maggie will eventually take over leading Hilltop from him.

An aside based on the assumption that Maggie will lead Hilltop on the TV show like she does in the comics: While I love our gang of survivors, I'm still very confused how whenever they go to another town, they end up becoming integral in a matter of minutes. It happened with Rick in Alexandria, Morgan at the Kingdom, and it's happening again now with Jesus hinting that Maggie would make for a good leader of the Hilltop. Since the comics do have Maggie taking over leading the colony from Gregory, it's pretty inevitable that she'll be doing that in the TV show. And while I'll be thrilled to see her in a well-deserved leadership role (Deanna foresaw this!), the show sure is indicating that a lot of people who prefer to be followers somehow managed to survive the zombie apocalypse, which seems unbelievable to me. But what do I know? I'm nitpicking a show about zombies after all.

Anyway, the point is that Maggie and Gregory's fates are intertwined — and that will be the case even after Maggie becomes leader of the Hilltop. In the comics, Gregory betrays Rick and Ezekiel to Negan and Maggie steps up and encourages the Hilltop to defend themselves against the Saviors. The community then appoints her as their leader over Gregory cause duh, but the disgraced man is still allowed to live there. Of course, that doesn't sit well with Gregory and after a significant time jump of two years, he ends up getting revenge by poisoning Maggie. She survives, thanks to Jesus discovering her, and although she attempts to keep him imprisoned, she realizes she needs to kill Gregory to make sure that the community is safe from him and he is hung.

So if Gregory is pissing you off, don't worry — he's most likely going to die on the show. But considering that Maggie just got to the Hilltop after losing Glenn, it might not be for awhile. I'm thinking Gregory may die sooner in the show than he does in the comics, but be prepared to see him antagonize Maggie for quite some time to come.

More like this
'The Sandman’s Ending Is A Departure From Neil Gaiman’s Comic Book Series
By Kadin Burnett
Here’s When 'She-Hulk' Takes Place In The MCU
By Brad Witter
Everything To Know About 'Evil' Season 4
By Meguire Hennes
Does 'Locke & Key’s Ending Mean There Could Be A Season 4?
By Sophia Moore
Get Even More From Bustle — Sign Up For The Newsletter