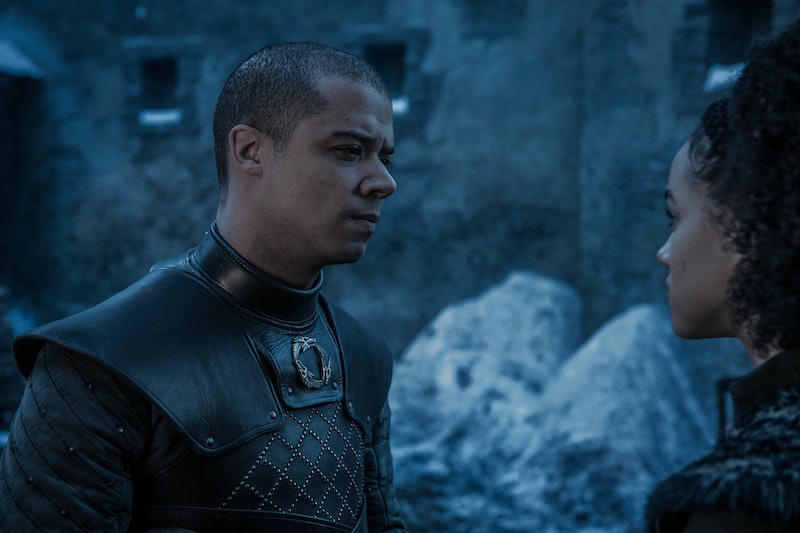 It seems inevitable that a whole bunch of people are going to die in the upcoming Battle of Winterfell, but one character who fans hope make it is Grey Worm (Jacob Anderson). The commander of the Unsullied has faithfully fought for Daenerys since she freed them from the Masters of Astapor back in Season 3 and has since fallen in love with Missandei (Nathalie Emmanuel). However, their conversation in Season 8, Episode 2 had audiences fearing that Grey Worm is going to die in the Battle of Winterfell.

"When Daenerys takes her throne, there will be no place for us here," the Unsullied soldier tells Missandei, referring to Winterfell. "I am loyal to my queen. I will fight for her until her enemies are defeated. But when the war is over and she has won, do you want to grow old in this place? Is there nothing else you want to do, nothing else you want to see?" She answers that she wants to see the beaches again, to which Grey Worm responds that he'll take her there and protect her. Apart from it being an incredibly sweet, romantic conversation, it seems pretty obvious that soldier boy is doomed.

As Uproxx's Brian Grubb said, "I have seen hundreds of action movies, and 'making plans with your loved one before you do a dangerous thing' is a surefire way to get killed. That's like Rule Number One of action movies." And since it's become a running joke that everyone is going to die this season, this hopeful conversation has to mean he's not going to make it.

But perhaps we're thinking about this all the wrong way: Maybe Missandei is the one who dies and Grey Worm returns from battle, only to find that his true love has become a White Walker! But still others are hoping that the both of them are going to make it out of this thing alive.

Grey Worm and Missandei's relationship has long been a fan favorite. Not only are they two of the only people of color on the show, but their relationship is sweet enough to melt a heart of dragonglass. As a result, fans were naturally displeased to see the couple's fate seemingly sealed. However, this may not be the end of the Unsullied's story. "Grey Worm goes on a journey this year," Anderson told Insider. "He's in unknown territory, and I think people are going to feel very conflicted about every character in this season. And Grey Worm is no exception. That's what I'll say." Hmmm, so does that mean he survives the Battle of Winterfell, or will he do something controversial over the course of the battle?

Whatever the case, it sounds like filming the upcoming fight scenes was brutal. "There were moments when you're freezing cold, you've got this weird chemical fake snow in your face, and there's real snow, and you're wearing armor and trying to fight in all this sh*t weather," the Grey Worm actor told Insider, "but then occasionally you look around and you're like, 'Look how amazing this is.'"

But whether or not Grey Worm survives the upcoming battle, what about the next one? There's bound to be more than one explosive battle in Game of Thrones Season 8, and will the Unsullied commander prove as lucky in those, as well? After all, not only are they heading up against the literal undead, but Grey Worm is a desert boy, and the cold may get to him. If audiences will recall, he's narrowly escaped death before in Season 5, when the disgruntled Sons of the Harpy rose up against Dany. But while he was only injured, many of his soldiers were killed.

But let's cross our collective fingers and hope Missandei and Grey Worm make it to the beach, after all. "Those kids are so good, they're so pure," Anderson told Buzzfeed's AM to DM, referring to his and Emmanuel's characters. "They deserve some happiness."