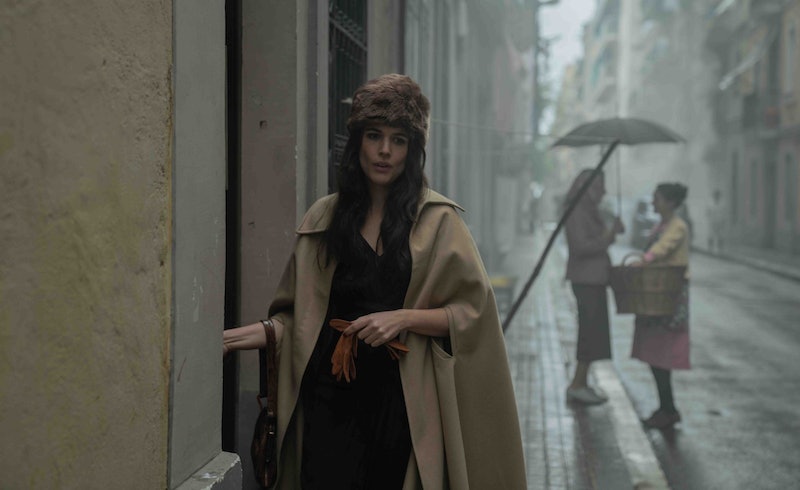 Continuing its expansion into more international markets, Netflix announced its fifth original Spanish series, Hache, back in July 2018. The show, which follows a woman named Helena (Adriana Ugarte) embroiled in the heroin trafficking business in 1960s Barcelona, unfolds across eight hour-long episodes. And while it's not yet clear if Hache will return for Season 2, there certainly seems to be enough material for more.

As reported by Deadline, Hache is loosely based on real events. After Helena, a sex worker, catches the eye of Malpica — a crime boss with a violent streak and a reliance on morphine — she rises to the top of the organization. However, the rest of the show is mostly fictional, as little else is known about the story that inspired it.

Series creator Verónica Fernández told Variety that she first got the idea for Hache after reading about how the crime organization's heroin trade between Asia and America used Barcelona as a port.

"In doing more research I found how the Italian drug dealers moved the heroin and another story that said the Barcelona authorities had found dolls stuffed with heroin washed up on the shore," she explained. "Combining these elements, because there is not much else in the historical record, we have created the story of our series."

Fernández went on to describe Hache as "a story of survivors," since many of the characters do terrible things out of sheer necessity. She doesn't see them as black and white, but complex and sympathetic people doing what they need to get by.

"We believe life is hard, and Hache proves it. I will say behind their hard facades, there are redeeming qualities in everyone," Fernández said. "For example, the strength that Hache has to keep moving forward and the unconditional love she has for her daughter and her partner, who is in jail. We've created complex characters of light and shadow. If there were only shadows it wouldn't be very interesting."

That nuanced, high-stakes premise is likely what attracted Netflix to the project. And though the company has yet to reveal long-term plans for the show, its future looks bright: in a press release, Erik Barmack, Vice President of Netflix's International Originals, said they were "big fans" of the creative team, which bodes well for a renewal. Until then, stay tuned.