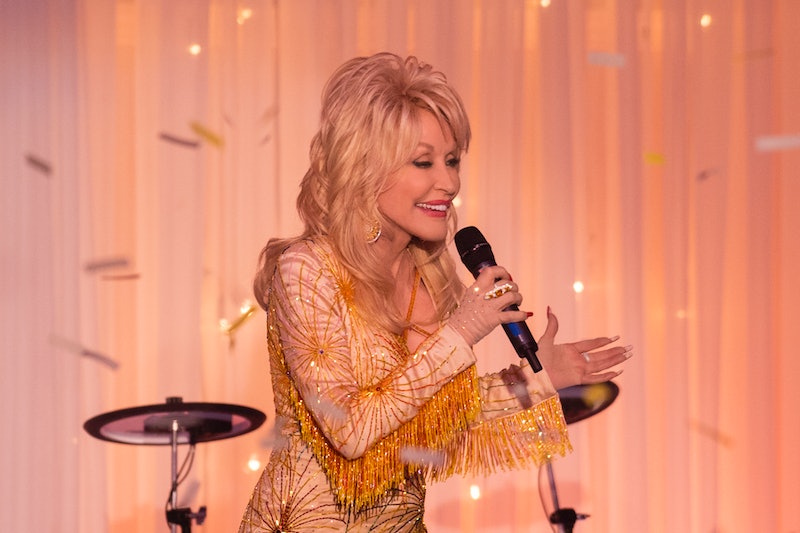 Netflix's new anthology series Heartstrings tells the stories behind eight beloved Dolly Parton songs, from "Jolene" to "Down From Dover." However, considering the country singer's career spans more than 50 years and just as many albums, Heartstrings could easily return for Season 2...and well beyond that. Unfortunately, Netflix hasn't yet announced its long-term plans for the show, but there's reason to believe it will be back.

For one thing, it's not the first time Parton has brought her music to the small screen. She previously released two TV movies based on her 1971 single "Coat of Many Colors": 2015's Dolly Parton's Coat of Many Colors and 2016's Christmas of Many Colors: Circle of Love. Both movies were incredibly successful, with Coat of Many Colors drawing in more than 13 million viewers and the follow-up attracting more than 16 million. If Heartstrings can manage the same, Netflix could have a fruitful hit on its hands.

Secondly, Parton seems quite excited about the project, which bodes well for her future involvement. "As a songwriter, I have always enjoyed telling stories through my music. I am thrilled to be bringing some of my favorite songs to life with Netflix," Parton said in a statement when Heartstrings was announced back in June 2018, per Deadline.

It's possible that Netflix wants to gauge the success of Heartstrings' first season before committing to a second, as they would with any show. However, it's hard to imagine that a series based on songs by one of music's most prolific and iconic songwriters will fall flat, not to mention that it has a lot of star power to back it up. Ginnifer Goodwin, Kathleen Turner, Julianne Hough, Katie Stevens, and Bellamy Young are just some of the actors who appear in the first season.

If Heartstrings is renewed for Season 2, it may be a while before it comes back. Parton told People in May that she planned to begin shooting the 9 to 5 remake with Lily Tomlin and Jane Fonda within the next few months, and even if they've since started, that could be a time-consuming process. Given that Parton is an executive producer on Heartstrings and the series is about her songs, she'll probably want to be very hands-on for Season 2, so her schedule will likely be a large factor in determining production should more episodes be green-lit.

Until then, though, at least viewers can start campaigning for which Parton songs they want to see brought to life next.