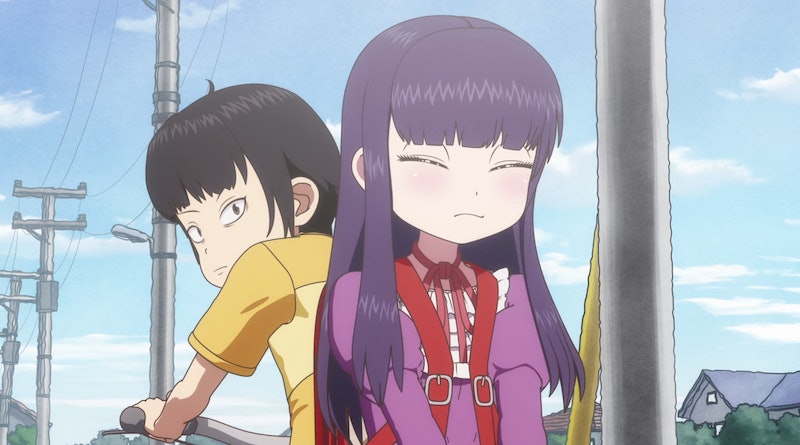 Hi Score Girl, originally called Hai Sakuo Garu, is an anime romantic comedy about two middle schoolers set in '90s Japan. Haruo is a nerdy outcast who only excels playing arcade games, while Akira is a pretty, popular, rich girl from his sixth grade class — who just so happens to kick Haruo's butt at the arcade. The anime already premiered in Japan in July, and now, Hi Score Girl is getting its international debut when it hits Netflix on Dec. 24. But will there be a level up from here? Will Hi Score Girl get a Season 2?

At the moment, neither Netflix nor producer J.C. Staff have indicated that Hi Score Girl will be either confirmed or cancelled for Season 2. Whether or not the series returns for a full follow-up season will likely depend on whether there is enough original source material remaining after the 12 episodes of Season 1.

Whats-On-Netflix describes the plot of Hi Score Girl as follows:

"Yaguchi Haruo doesn’t have much going for him in life. He’s not attractive, he’s not athletic, and he’s not very academic. But he does have one unique trait in his favor: mad gaming skills. Known in his arcade as “Beastly Fingers Haruo” he triumphs over all challengers until one fateful day when he encounters Oono Akira. She defeats him playing Street Fighter II, leading Yaguchi to seeks her out to challenge her again. He hopes to outplay his video game rival and dominate once again."

While an official Season 2 isn't a sure thing just yet, there are definitely more challenges and adventures ahead for Haruo and Akira. After the Season 1 finale aired in Japan, the episode announced that three additional episodes of Hi Score Girl are on the way for March 20, 2019, according to Anime News Network. That's the premiere date for the episodes in Japan, so it's currently unclear whether that will also be the international release day on Netflix. But as Hi Score Girl is an official Netflix original, you can feel confidant that Episodes 13, 14, and 15 will make it onto the streaming service at some point in 2019.

If these additional episodes are well-received, it's possible that there might be more Hi Score Girl in store. Although Oshikiri might have ended the original manga, that doesn't mean he couldn't revive it in a newer adaptation, or decide to write more material for the anime.

The series is still popular in Japan, with a collaboration announced in Anime News Network between Hi Score Girl and the EVO gaming tournament in February 2019 — the details of which aren't clear just yet. But once Netflix is able to collect sufficient international viewer data in a few months, then there will be a final decision on whether Hi Score Girl gets another life, or if it's game over for good.