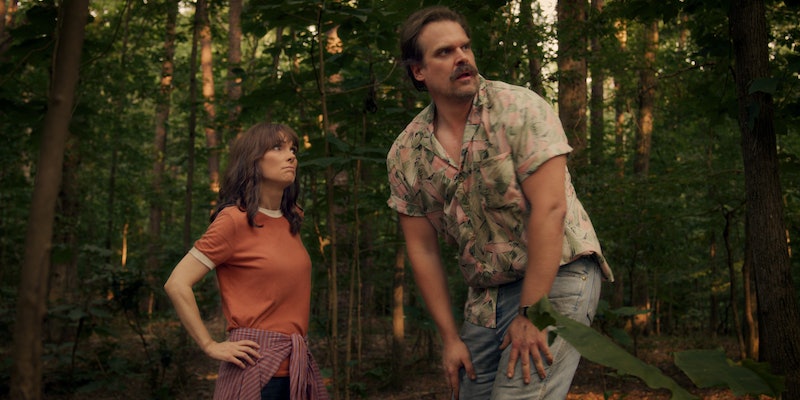 Spoilers ahead for Stranger Things 3. Over three seasons, Stranger Things viewers have witnessed and learned about addiction, loss, grief, and fatherhood through Police Chief Hopper and he's become an integral leader of this increasingly complex story. The show would feel incomplete if Hopper wasn't in Stranger Things 4, but the Season 3 ending makes an absence more than likely.

As a whole, Season 3 couldn't be more different from its predecessors. Along with its maturing core of actors, it has grown up in quality, content, and depth. It newly tackles teenage romance (and by default, breakups), self-exploration, emotional communication, and sexuality, all which give it a more serious, palpable tone; one that wasn't always present when four 11-year-olds gathered in a basement to play Dungeons & Dragons. Unfortunately, with the progressed tone came one imminent plot bandaid that needed yanking: The apparent death of a beloved main character.

As they do, Joyce and Hopper spend Season 3 fighting evil and protecting their kids while trying their hardest not to fall in love with each other. They combat the Russians who land in Hawkins and are inevitably linked to the Upside Down gate that Eleven closed in Season 2. They devise a plan to close the gate once more and for all, and Hopper loses his life in the process.

At first, it's unclear whether or not he's dead or alive among the rubble that results from the gate closing, and before she can confirm or deny it, Joyce has to escape from the Russian enemies to save herself. Three months later, a snapshot of an Indianapolis Gazette front page displays the headline, "Hero Chief dies in fire."

In July 2017, David Harbour, who portrays Hop may have foreshadowed this moment with TVLine. “We don’t have an open-ended thing like The Walking Dead,” he said. “There is an end to all these characters… We’re going to give you something fun and then we’re going to get out before we’ve worn out our welcome. We have a specific story that we’re going to tell.”

Most fans will probably agree that it feels too soon to let go of Hop. He was just beginning to let go of his tough exterior and allow himself to feel, and he loved being El's father. Moments before the rubble took him, Joyce finally agreed to go on a date. The Gazette article that briefly appears on screen claims that the origin of the Starcourt Mall fire is unknown, meaning the paper is allegedly unaware of the corruptions and evil forces that were beneath it. So in reality, they could also be incorrectly reporting Hop's death.

In ways, his departure also feels final. El mourns him, re-reading the speech Joyce helped him write about his emotions that he never delivered, and she moves away from Hawkins with the Byers in an emotional season finale. But there's still a slight chance it's all a ruse to accomplish the perfect plot twist in Season 4. Hopper is never shown falling or dying when the gate to the Upside Down is closed.

Instead, the whole sequence is centered on Joyce, which means viewers don't know for sure where Hop went, how he got there, or other events that led to his alleged death. What if, before the gate closed, Hop was thrown inside? What if he's still wondering around the underground Russian fortress? Stranger things have happened.

More like this
'Stranger Things' Star Jamie Campbell Bower Reflects On Being Sober For Over 7 Years
By Radhika Menon
Sadie Sink Almost Wasn’t Cast On 'Stranger Things'
By Frances Stewart
Netflix Just Revealed When 'Never Have I Ever' Seasons 3 Will Premiere
By Gretchen Smail and Alyssa Lapid
Does 'Locke & Key’s Ending Mean There Could Be A Season 4?
By Sophia Moore
Get Even More From Bustle — Sign Up For The Newsletter