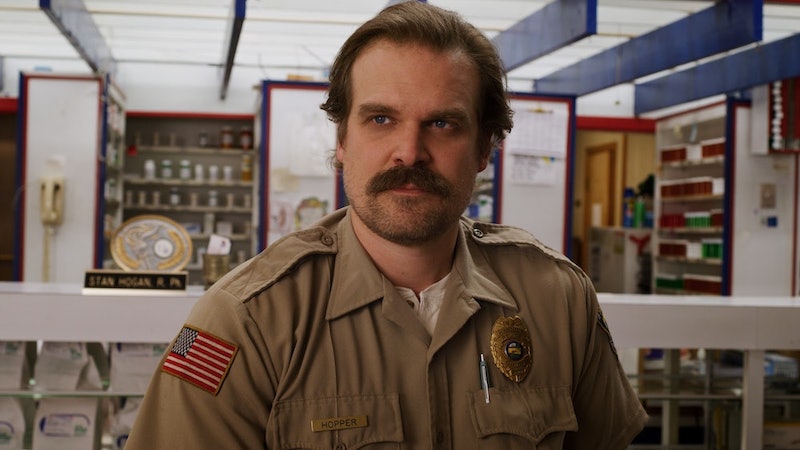 Wait… is Sara's death linked to none other than Hawkins Lab? According to David Harbour himself, a Stranger Things Easter egg about Hopper’s daughter could tease something much bigger about Hawkins Lab — and of Police Chief Jim Hopper's past as a whole. In the last season of Netflix’s Stranger Things, which returns for a third season on July 4, viewers learned more about the heartbreaking circumstances surrounding the death of Hopper’s daughter Sara, who presumably died from cancer at a young age. Now, thanks to an otherwise subtle prop — that is, a blue hair tie — that Hopper routinely wears around his wrist, fans must now contend with the sinister possibility that Sara's death is somehow linked to the facility.

In one of Hopper’s earlier flashback scenes, Sara is seen wearing a blue hair tie. This acts as one of the more obvious observations that the hair tie does, in fact, belong to his deceased daughter. But as Insider reporter Kim Renfro has acutely noted, several parallels beyond the blue hair tie itself suggest a larger connection to the facility, such as a very compelling stairwell and stuffed animal observation. "On the season two finale, Hopper and Eleven found Dr. Owens in a stairwell insider Hawkins lab," Renfro wrote on Twitter. "The handrails match perfectly with the staircase where we saw Hopped in a flashback crying over his daughter's illness."

Then there’s the stuffed lion that keeps resurfacing throughout the season. When Hopper first breaks into Hawkins Lab, he finds a stuffed lion in what was once Eleven’s room in the facility. Later, viewers see the same stuffed lion in Castle Byers while Will is trapped in the Upside Down. As Renfro has noted, this is the same stuffed lion that Sara owns in several hospital flashbacks. Yes, perhaps it was a very popular toy choice during the ‘80s. Still, all signs point to the notion that — much like the case of Eleven and Will — Sara was somehow bound to the facility, too.

If all this evidence isn’t compelling enough, Harbour himself confirmed the parallels to Insider. He teased of the connection between Sara’s hospital room and Hawkins Lab, "Yes, it is the same location. So that's interesting. Or it's a similar location.” Harbour added,

"There is a connection there perhaps that we may go into further down the line. Again, these are little things that highlight mysteries that I don't want to give too much away from but I don't think anything is done randomly in this show. So the fact that you're picking up on these things is something that will pay off in some way."

As Insider has noted, there are several defining moments in Season 2 where Hopper wears the hair tie on his wrist. In one episode, for example, Hopper can be seen playing with the hair tie amid his fight with Eleven in his grandfather's cabin. According to Harbour, the item acts as a “security blanket” for Hopper. “It becomes a thing that's like a security blanket for him. It's a reminder for him. And you'll notice throughout the series, I will occasionally play with it like when I'm talking to Eleven or going through a difficult time,” Harbour told Insider. "I'll fiddle with it, almost like you would with a wedding ring when you're going through a divorce but you're still wearing it. It's a constant reminder to him of his struggles and his guilt around not being about to save his child."

In perhaps the most bittersweet reference to the hair tie, Eleven can actually be seen wearing it around her wrist at the Snow Ball in the Season 2 finale. According to Harbour, this serves as a major significance in terms of what to expect from Hopper’s new father figure role to Eleven. “At the end of the series you'll see that Jim is not wearing it anymore… It's something we'll delve more into in terms of Jim's daughter and him confronting this Eleven relationship and what that means... there's more to be revealed there."

If Sara's death is, in fact, linked to Hawkins Lab, it would definitely bring a new, emotional layer to Hopper and Eleven's father-daughter relationship. If that's the case, don't forget the tissues come July 4.