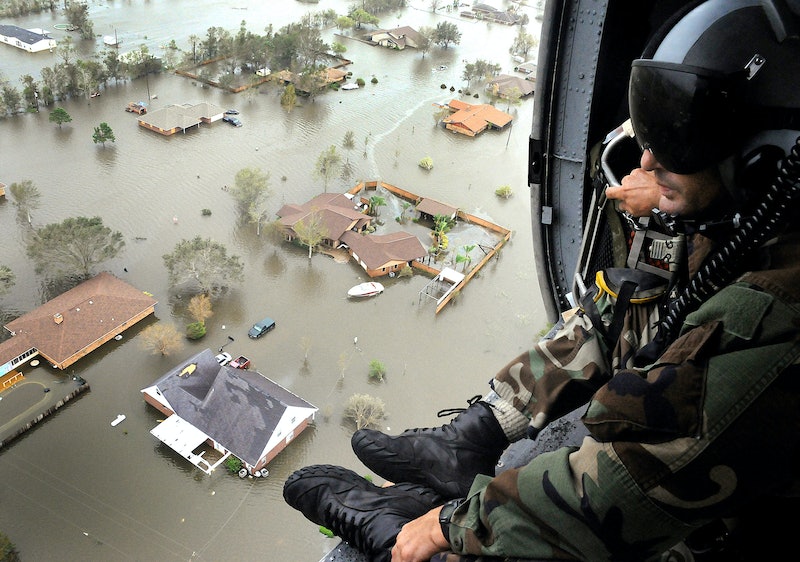 Hurricane Harvey is heading to the eastern coast of Texas, bringing with it expected winds of 120 miles per hour and feet of rainfall on towns like Corpus Christi, Brownsville, and even Houston. It's been upgraded to a Category 3 hurricane, and experts are expecting Hurricane Harvey to be comparable to Hurricane Ike in 2008.

Hurricane Ike hit the eastern coast of Texas in September 2008, and laid a path of destruction that made it the third costliest hurricane in American history, after Sandy and Katrina, with an estimated $29.5 billion of property damage, according to a report by the National Hurricane Center. Storm surges reached above 10 feet of water in Louisiana and Texas.

That report also found that 21 people died in Texas, Louisiana, and Arkansas, the three states that were hit hardest, with an additional 28 deaths directly or indirectly connected to the storm in the states of Indiana, Illinois, Kentucky, Michigan, Missouri, Ohio, Pennsylvania, and Tennessee, which were hit less directly. Other estimates put the death toll much higher.

The edges of Hurricane Ike reached all the way to Canada. In total, 2.6 million people lost power in Texas and Louisiana, and even all the way in Ohio, an additional 2.6 million lost power. It destroyed 10 oil rigs and damaged pipelines.

On Sept. 11, 2008, just before the storm hit, the National Weather Service released a shockingly dire warning to residents of Houston:

ALL NEIGHBORHOODS, AND POSSIBLY ENTIRE COASTAL COMMUNITIES, WILL BE INUNDATED. PERSONS NOT HEEDING EVACUATION ORDERS IN SINGLE FAMILY ONE OR TWO STORY HOMES WILL FACE CERTAIN DEATH.

Hurricane Harvey is expected to actually be a stronger storm than Hurricane Ike or even Hurricane Sandy — the strongest at least in terms of wind to hit the United States mainland since 2005. And unfortunately, some experts worry that the region has not sufficiently prepared itself for another big storm. A planned sea wall in the Galveston bay, nicknamed the "Ike Dike," has still not been built.

A big unknown in the potential damage of Hurricane Harvey depends on the path of the hurricane. That dire warning from the National Weather Service to the residents of Houston turned out to be premature — though Ike looked like it was heading straight for the country's fourth largest city, it ended up diverting slightly, and avoiding the worst damage that Houston, a city of 2.3 million people, could have sustained.

But there remains the possibility of that Hurricane Harvey could hit the city of Houston directly in a way that Ike didn't. If Harvey hits Houston just a few miles away from where Ike did, it could flood a significant portion of the city, including the homes of thousands, chemical plants, oil refineries, and the Houston Ship Channel, one of the busiest shipping lanes in the world. If the hurricane hits just right, it could cripple the national economy due to increased prices for oil as a result of a shutdown of Houston shipping for weeks.

“We’re sitting ducks. We’ve done nothing.” Phil Bedient, an engineering professor at Rice University who is the co-director of the Storm Surge Prediction, Education, and Evacuation from Disasters (SSPEED) Center, told ProPublica in 2016 as part of a feature with The Texas Tribune on a hypothetical storm that could wreck Houston. “We’ve done nothing to shore up the coastline, to add resiliency ... to do anything.”

We don't know yet whether Harvey will be the perfect storm that experts have feared could hit Houston, kill hundreds, cripple an American city, and cause serious damage to the U.S. economy. But it's a big storm, and it's hitting a very vulnerable region. Americans — not just those living in Texas or Louisiana, should brace themselves.