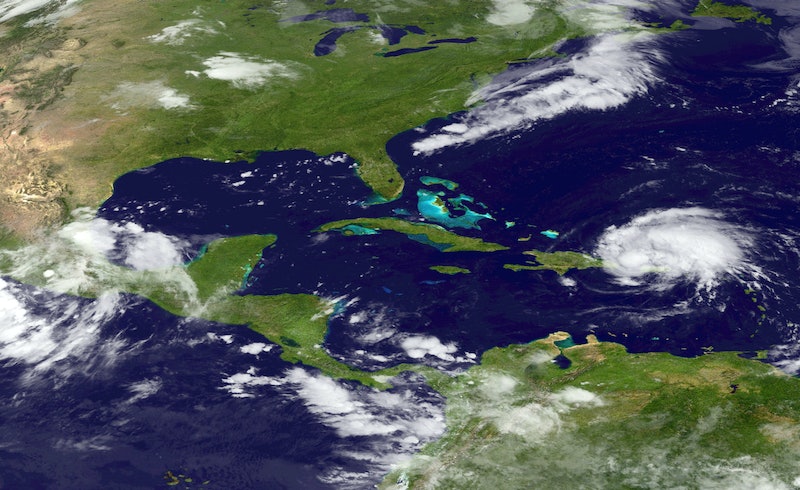 American news media remained glued to Houston coverage, focusing mostly on the very serious recovery effort from Harvey that remains ahead in Texas and Louisiana along the Gulf Coast. But if you take a look at the coverage in Puerto Rico, they've already moved on to the next natural disaster headed their way, Hurricane Irma. The media in Puerto Rico is right to worry about Irma hitting the island, a U.S. territory — it's likely headed right for it.

Of course, meteorology cannot surely predict the path of a hurricane, but AccuWeather meteorologist Brian Thompson said that it looks like it will reach part of the Lesser Antilles, the Leeward Islands (among them Antigua, Saint Kitts, and the U.S. Virgin Islands) first, followed by Puerto Rico, which is just north of there. "Steering winds will guide Irma close to the Leeward Islands and then perhaps Puerto Rico and Hispaniola during the middle days of next week," Thompson told the weather website.

Of course, this could change. Irma remains in the middle of the Atlantic Ocean, and some modelings show it going northeast of the island. On Thursday, she reached a Category 3 "major hurricane," but that was downgraded on Friday to a Category 2. That reduction in strength is front page news in Puerto Rico. El Nuevo Día, one of the island's top Spanish-language dailies reported the news from the National Hurricane Center.

Meteorologists had warned that the storm could grow to a Category 4 by the time she gets closer to land. A storm of that magnitude sees winds from 130 to 156 mph and is considered "extremely dangerous" with "catastrophic damage" likely to occur. The downgrade for Irma makes that a lot less likely, although still not impossible. Currently Irma is clocking in at 110 mph, just under the cutoff for a Category 3, which begins at 111 mph.

John Cangialosi, a hurricane specialist for the National Hurricane Center, explained that after some rapid growth, Irma was settling at a more consistent speed. "After rapidly strengthening on Thursday, Irma appears to have leveled off in intensity," Cangialosi explained. But for how long is the question.

Right now the storm has moved into cooler waters, but it's headed toward areas with warm seas, something that sends hurricanes into high gear and can help them develop in intensity and strength.

No matter the strength when it gets there, the storm has some ground — or rather ocean — to cover. It is nearly 1,600 miles from the Leeward Islands and is moving at just 13 mph. It should be well into next week before it moves close to Puerto Rico.

More like this
The 15 Best Dresses For Hot Weather
By Andrea Gale Boerem
13 Summer Solstice Quotes To Celebrate The Longest Day Of The Year
By Sadie Trombetta
The Summer Solstice Spiritual Meaning, Explained
By Jessica Booth and Brittany Beringer
For These Abortion Clinic Volunteers, Going TikTok Viral Is A Risk Worth Taking
By Audra Heinrichs
Get Even More From Bustle — Sign Up For The Newsletter