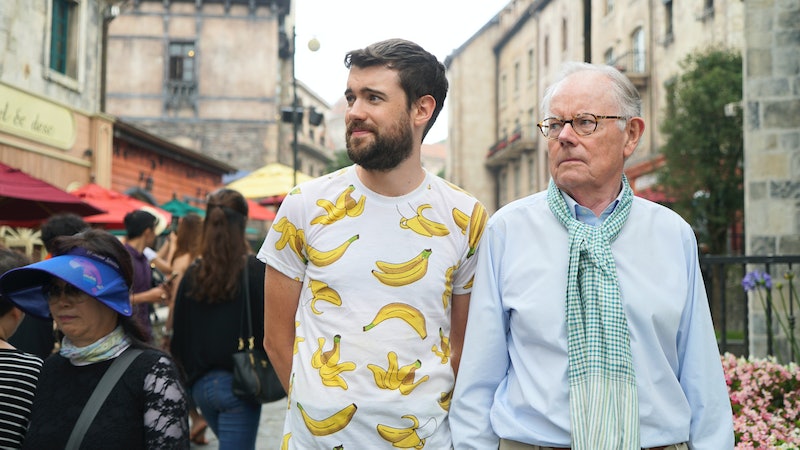 "How does @jackwhitehall still have me doing this?" Whitehall's dad Michael joked on Twitter ahead of the season launch. And Whitehall was similarly dry-witted. "So excited for you to see what we got up to in Season 3 of Travels With My Father," Whitehall tweeted. "Any notion I might have had of launching a career in the U.S. will surely be dead and buried once they see this. Thank you [dad] for c*ckblocking my American dream."

Of course, that's all part of their comedic banter on the show, and if Season 3 is anything like the previous two, fans will want more episodes ASAP. Netflix has yet to announce any plans to continue the series, but so far, it's returned pretty reliably every September, and there are certainly plenty of other countries for the Whitehalls to visit. In the meantime, here's some of Whitehall's other work you can watch while you wait for news.

When not traveling with his father, Whitehall is a stand-up comedian — and one of his specials is on Netflix!

Live At The Apollo

While you'd have to live in the UK to watch this stand-up series, there are plenty of clips of Whitehalls' appearances on Youtube.

Whitehall also did a set on Fallon recently.

You can see Whitehall act in films like The Nutcracker and The Four Realms, Mother's Day, and the Amazon series Good Omens, but he is perhaps best known for the series Bad Education and the movie that followed, both of which are streaming on Netflix.

This Video Of Him & James Corden

Whitehall is good friends with fellow Brit James Corden. Unfortunately for him, the late night hose reserves this painful Late Late Show game for his nearest and dearest pals. Only Whitehall and Dominic Cooper have been subjected to it.

This Other Video Of Him & James Corden

In what can only be described as the most baller move ever performed on live television, Corden and Whitehall once ordered pizza to set while competing together in a game show called The Big Fat Quiz Of The Year. Come for the matching tuxedos, stay for their rendition of "Call Me Maybe."

Whitehall also has a UK tour planned for this year, and is in Disney's upcoming Jungle Cruise film. But even with his busy schedule, he and his dad should be able to fit in another trip. With only five or six episodes per season, it doesn't seem like too much of a to-do to film, and hey, everyone needs a vacation! Fingers crossed that they get the call soon.

More like this
The 'Dead To Me' Creator Says Her Series Finale Idea “Felt Very True To The Show”
By Brad Witter
Watch The Gripping First Trailer For The 'Harry & Meghan' Netflix Doc
By Jake Viswanath
At 28, Prue Leith Was In A Secret Affair & Sharing Apple Pie With Stoned Neighbors
By Grace Wehniainen
Here’s Everything Coming To & Leaving Netflix In December
By Jake Viswanath
Get Even More From Bustle — Sign Up For The Newsletter