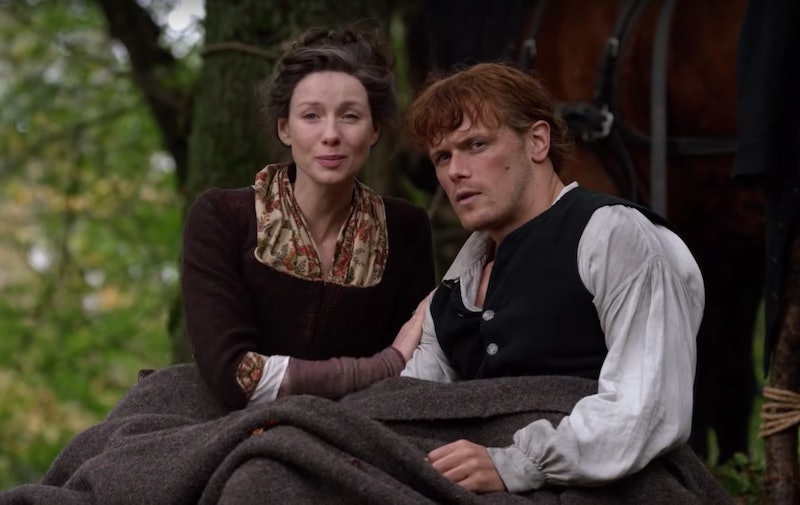 Historical time travel drama Outlander is now in its fourth season, but that hasn't stopped people questioning whether certain characters have a hidden ability to move backwards and forwards through time. It's clear that Claire (played by Caitriona Balfe) has the ability, but will Outlander's Jamie go to the future or is he destined to remain exactly where he is?

The Amazon Prime series is an adaptation of a book series written by Diana Gabaldon, so it's pretty easy to read ahead and see where the storyline's going. However, any Game of Thrones fan will tell you that television doesn't always stick to the plot of a novel and can sometimes go in a completely different direction.

What viewers do know is that season four of Outlander will feature a bit of time travelling. Unfortunately, this isn't likely to come from Jamie. Actor Sam Heughan, who plays Jamie, confirmed that there will be a reunion between his character and daughter Brianna. Considering Brianna has been left in the 1960s and Claire and Jamie are currently in 18th century America, a little magic is definitely in order.

"It’s a huge moment and will be the catalyst to a lot of the drama that unfolds," Heughan told Variety. There seems to be no question that it will be Brianna travelling back in time, rather than a case of Jamie shooting into the future, with the show's executive producer Maril Davis explaining why it may be better for Brianna to stay where she is: It’s obviously a dangerous time, and I think you’d want your daughter probably to stay in a time where it’s not quite as dangerous."

According to fans of both the books and TV series, one needs to carry a specific gene in order to time travel. Claire has the gene and has clearly passed it onto her daughter while Jamie appears not to have been blessed (or cursed) with the gift. Some fan theories state Jamie's spirit can travel through time while his body remains rooted in reality. This appears to have been confirmed by Outlander's author.

IGN attempted to outline all of the series' time travel rules because obviously you can't just pick and choose where you show up whenever you feel like it. According to the site, time travel takes a hell of a lot out of a human body, which explains why Claire agonised over her decision to travel back to Jamie in the first place. Wearing certain gemstones can help aid the process, as can travelling at certain places or during certain times of the year.

But the most important factor is that time passes the same, no matter where a character ends up. So two decades for Claire in the future also spelled two decades for Jamie in the past. Not being able to time travel on a whim kind of takes all the fun away, don't you agree?

The first two episodes of the fourth season have proven that travelling back to the past is no laughing matter. Jamie and Claire are currently experiencing the horrors of slavery and have already had to choose between sacrificing themselves or sacrificing the life of a slave. If Jamie is indeed stuck where he is, his future seems full of moral dilemmas.

Outlander is available to watch on Amazon Prime.