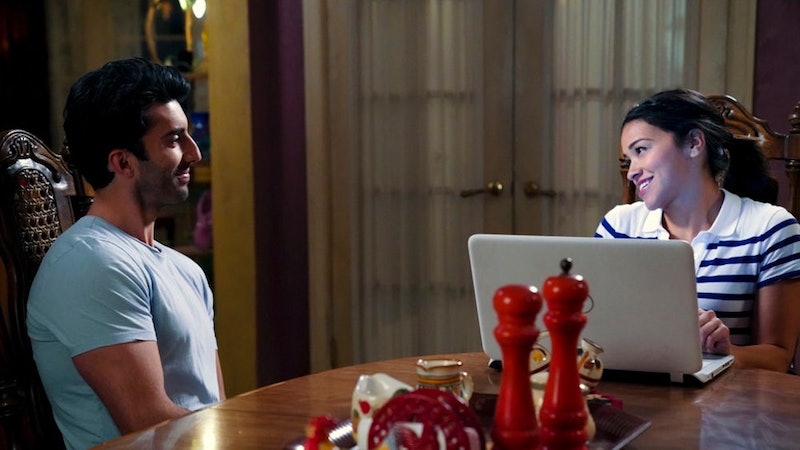 Jane and Rafael shippers were undoubtedly on the edge of their seats during the Season 4 finale of Jane the Virgin when it was looking more and more likely that Rafael was going to propose. He'd asked Jane's family for their blessing, which they gave whole-heartedly and Jane, who found out the big secret ahead of time, had every intention of saying yes. However, it now remains unclear if Jane and Rafael will stay together on Jane the Virgin now that Michael has seemingly come back from the dead. Because yeah, that could definitely throw a wrench in their future plans to be together.

In the final few moments of the finale, Jane walked into Rafael's apartment for their big date, however, her jaw dropped to the floor when she saw that there was someone else waiting to see her there. A scruffy Brett Dier, who played Michael on the series, was standing in the room, looking at her, despite the fact that Michael had died several years ago. And while it has yet to be revealed if this really is Michael and why he exactly felt the need to fake his own death, it definitely complicates things for Jane and Rafael's relationship, especially because Jane is still technically married to Michael.

Ever since Michael died, Rafael has felt conflicted about his feelings for Jane. While he absolutely loves her, he knows that if Michael were still alive, they wouldn't be together. It makes him feel like he's her second choice and now that Michael is back in the picture, it's like he's about to see all of his deepest fears come to fruition, which is something series showrunner Jennie Urman was eager to explore for the show's final season.

"The biggest fear Rafael had was: Is he Jane’s second’s choice? And with the reappearance of this character — or this character that looks like him — that’s all going to be fore-fronted very dramatically," Urman explained during an interview with TVLine, adding:

"At the same time, he had a great heroic moment of bringing Michael back even though he knew it would put his relationship in jeopardy. I’m excited about that. As we explore themes [about] coming full circle and move into our final chapters, it plays a very important part and resets things in a pretty serious way."

It's true that Rafael risked everything in showing Jane that Michael is still alive. It could potentially make her fall even more in love with him, knowing with absolute certainty what a good guy he is. Or it could end up leading to more heartache.

"These are two really compelling people in her life, and I like to put characters in [situations where they have] to make impossible choices, and put them in surprising situations, then deal with all of the emotional fallout from that," Urman continued during the same interview. "I think this is going to allow us to explore Jane’s heart and her emotions and Rafael’s in a big, juicy, complicated way."

In other words, buckle up, Jane the Virgin fans. This love triangle is about to kick back into high gear. And as for whether or not Jane and Rafael will get a happily ever after, you'll just have to wait and see.