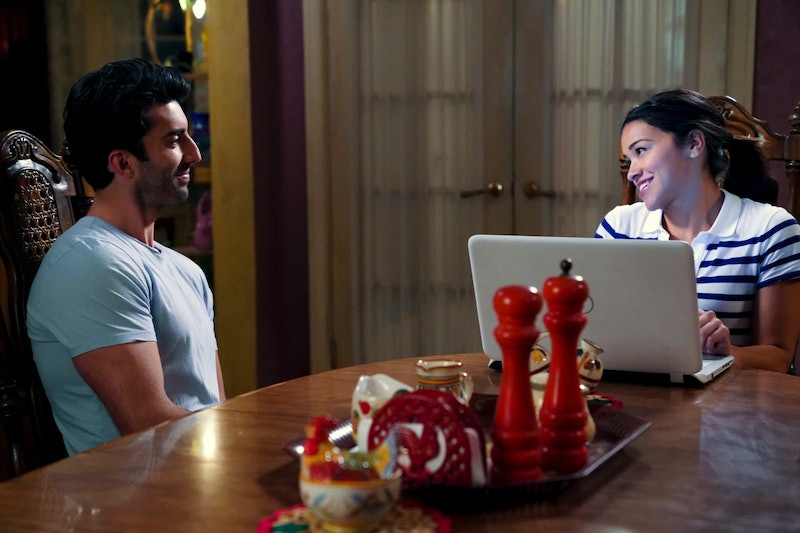 Major spoilers ahead for the Jane The Virgin Season 4 finale. In the episodes leading up to the Season 4 finale, Jane The Virgin had been reminding fans that they are watching a telenovela. But the show saved the biggest twist for last — Michael may still be alive on Jane The Virgin. After Rafael gets some intel from Rose in "Chapter 81," he pushes Jane away. She thinks it has to do with his parents, but based on a bearded Michael appearing in Rafael's apartment, it seems that Rose actually tells Rafael that Michael is still alive. Of course, the show could have another twist up its sleeve and that the person really isn't Michael. But for right now, Jane The Virgin has left viewers to wonder if Jane has been horribly deceived for the past four years.

With the announcement that Season 5 will probably be the show's last, it seems that everything is coming together beautifully in the Jane The Virgin Season 4 finale — particularly for Rafael and Jane. Rafael is going to propose to Jane and she is ready to accept. Then, a man in a blue shirt walks by Rafael in the crowded lobby of the Marbella and says, "Go see Sin Rostro now." Surprisingly, Rafael listens to that mystery person and visits Rose in jail in an effort to get his ex-stepmother to leave him alone. Except what Rose tells him appears to be as life-changing as she had previously promised.

Rafael invites Jane to his apartment and when she shows up, she sees Brett Dier's Michael standing there. Rafael doesn't tell Jane what Rose told him. And Michael doesn't speak. So there's a chance that this person isn't Michael and could be an identical twin or a person wearing one of Sin Rostro's masks. (Remember, it's a telenovela!) But Dier's character does heave a pretty heavy sigh upon seeing Jane, so the simpler explanation is that Michael pretended to die years earlier and now he stands before Jane, ready to confess.

Showrunner Jennie Snyder Urman posted a letter to fans right after the episode where Michael seemingly died. "Originally," she wrote, "I thought Michael would die earlier." The Jane The Virgin cast also seemed to confirm that Michael had truly died through interviews and social media posts. So has this been one long con orchestrated by everyone involved in Jane The Virgin? If so, they did one helluva job and the Game Of Thrones cast could learn a thing or two from them because this deception lasted 14 months.

If that really is Michael standing in Rafael's apartment, then that means a pretty rough road for Jane. She had chosen to be with Michael over Rafael and promised to spend the rest of her life with him. But since Michael's death, she found love again with Rafael. Before seeing Michael, Jane tells Rafael that they can deal with whatever Rose told him. "So whatever it is, we'll deal with it — together. Because I love you and you're it for me, forever," Jane says. And Rafael's heart was probably breaking in that moment since he knew that Michael is alive.

If Michael is not dead, Jane is technically still married to him. And she will have to deal with her feelings of love for both of these men all over again. She also will have to face the fact that Michael betrayed her for years. If Michael is alive, he probably faked his death for some undercover police operation. He'll probably say it was done to protect Jane and Mateo as well. Yet, his death caused Jane immense grief, so it might not be possible for her to forgive him.

Season 2 had ended with the cliffhanger that Michael might die. And now the Season 4 cliffhanger is that Michael might be alive. Jane The Virgin will most likely return in fall 2018, so viewers will have to wait until then to learn what's really happening. But somehow the idea that Michael is still alive and has been hiding it from Jane feels even more painful than his death.