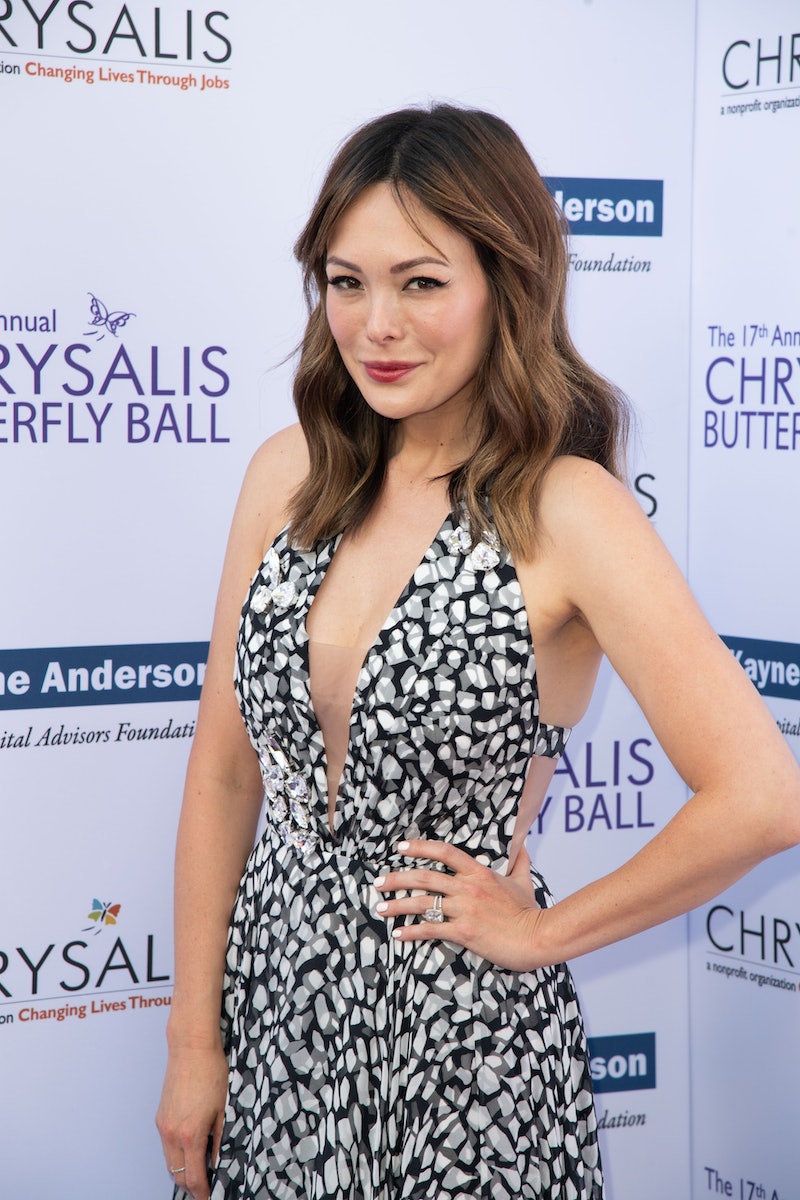 It's finally time for the Beverly Hills, 90210 to premiere on Fox — Wednesday, Aug. 7, more specifically. And while that's exciting news for fans, it may be difficult to remember which original cast members are joining the revival and who's sitting this one out. Audiences will be happy to know that fan favorites like twins Brandon and Brenda Walsh (Jason Priestley and Shannen Doherty, respectively), Donna Martin (Tori Spelling), Kelly Taylor (Jennie Garth), Steve Sanders (Ian Ziering), Andrea Zuckerman (Gabrielle Carteris), and David Silver (Brian Austin Green), are returning to the silver screen. And while that cast of characters is a mouthful to recite, it doesn't seem like series latecomer Lindsay Price will be on BH90210.

Price's character Janet Sosna joined the show in Season 8, per the series wiki, and was Steve Sanders's (Ian Ziering) love interest. The couple eventually had a baby together and got married by the series went off the air in 2000. Since then, Price has appeared on shows like Splitting Up Together, Lipstick Jungle, and Eastwick. She's also been a fixture in soap operas like All My Children and The Bold and the Beautiful, according to her IMDb. In fact, her first credited TV role was on Days of Our Lives.

Furthermore, Price confirmed to Us Weekly back in June that she wasn't asked to join the revival. "I would, of course I would, but I’m not — I think the original group is what the show is really all about," she told the magazine. "[B]y the time I was on the show, there had been many people who had come off and on. So I don't feel ownership over it. I feel more of a fan than anything else. I'm looking forward to watching it."

But while she won't be in this new Beverly Hills iteration, Price wrote a touching tribute to Luke Perry after his tragic death back in March. "I remember the night I saw the pilot episode of 90210. My life changed," she wrote, in part. "I took in everything my 14 year old brain could take in during that one hour on a Thursday night and I was 100% instantly all in. At the center of it all was this deep admiration I had for the actors. Can you imagine 7 years later getting to BE on that show for 3 seasons?"

In the same post, Price recalled interacting with Perry and had only positive things to say about him. "He was more than cool," she wrote. "He was KIND. I’ll never forget it. He was a generous, bright burning light."

Furthermore, Price seems like she's doing just fine, BH90210 credit or no. She's married to chef Curtis Stone and is raising kids, so it seems like she's pretty occupied with being a mom. And Price isn't the only one who won't be returning. Entertainment Tonight reported that Tiffani Thiessen wouldn't be appearing either, citing a scheduling conflict.

But if fans want to go back and see Price in the OG teen drama, they can always watch Beverly Hills, 90210 on Hulu, where all 10 seasons are streaming. So even if Janet doesn't appear in the BH90210 revival in a surprise cameo (which is unlikely), it seems like there's going to be plenty of characters and storylines to keep fans entertained.