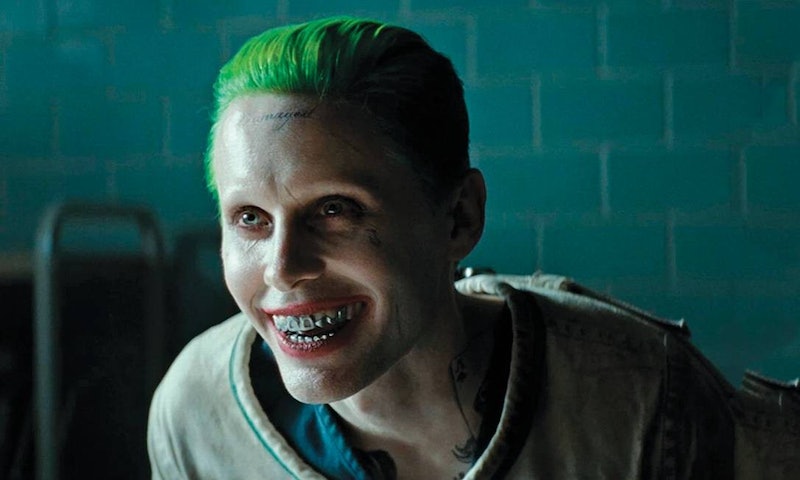 DC's latest film Joker, out Oct. 4, features Joaquin Phoenix reimagining Batman's nemesis as a middle-aged failed comic, stoking the city's simmering anger and frustration. But what does this recent retconning mean for the previous big-screen appearance of the Clown Prince of Crime in Suicide Squad? Will Jared Leto ever play the Joker again, or did his performance fall victim to a studio killing joke?

Director James Gunn set comic fans' hearts aflutter when he tweeted the intensely star-crammed cast of the upcoming Suicide Squad sequel. There's a lot of names to scroll through, but one is distinctly missing: Jared Leto. It's unclear why, exactly, Leto doesn't seem to be making an appearance in the film. But it's worth noting that, in 2018, Gunn tweeted an insinuation about the actor's dating life that couldn't have been well-received. There's also the matter of Leto's behavior around the time of Suicide Squad's filming — bringing the character into his real life by reportedly sending a dead pig to the first table read, among other disturbing things. (He has denied sending Suicide Squad actors used condoms and anal beads, however.) That said, however, there's no indication that Leto was "fired" from playing the character, by any means.

The shift could be due to the fact that, as Forbes reports, DC is moving in a different direction with its upcoming films. The magazine describes Suicide Squad as a "soft reboot" and claims that the once possible Harley Quinn/Joker film and solo Joker film featuring Leto have "fallen by the wayside" in favor of character-focused reboots, like Joker and the upcoming Robert Pattinson film The Batman, helmed by Matt Reeves.

It wasn't as if Leto's Joker even had much time to make an impression. After all the hype, he spent a grand total of less than 15 minutes onscreen in Suicide Squad. Speaking with IGN, Leto claimed his performance was dramatically scaled down by the time Suicide Squad hit theaters. "There were so many scenes that got cut from the movie, I couldn’t even start. I think that the Joker… we did a lot of experimentation on the set, we explored a lot. There’s so much that we shot that’s not in the film."

Whatever the situation with Leto, there's no risk of Phoenix replacing him in future films. Joker director Todd Phillips spoke for himself and Phoenix, at a press event, saying that they have no plan for a sequel. "I pitched it to Warner Bros. as one movie. It exists in its own world. That's it," he said, per IGN. Also, Joker takes place chronologically before the rest of the films, so the timeline wouldn't match up anyway.

As far as the continuation of the existing Suicide Squad story goes, Leto is also going to be absent from Birds of Prey. In the first full trailer, Harley Quinn (Margot Robbie) confirms that her and Mr. J have broken up. So unless there's a top secret cameo in the works, it looks as though there will be no Joker presence at all in the February release.

Post-Joker, Leto was recently cast as minor Spiderman antagonist turned antihero, Morbius The Living Vampire, in his own Sony Studios solo feature, as reported by Entertainment Weekly. Leto's playing Doctor Michael Morbius, a gifted scientist who turns himself into a not-undead bloodsucker trying to cure his own rare blood disease. Given the glimpse Leto shared on Instagram, the film seems to fit with DC's new direction of more realistic character studies. Instead of a cape and fangs, Leto wears a black hoodie.

This new comic book project aside, when speaking to Variety in May of this year, Leto said he "would definitely" return to the role of the Joker in the future if the circumstances were right. “It all depends on the script and the circumstances as it always does," he continued.

So there's no definitive word just yet on Leto being utterly out as the Joker. But for now, Phoenix's version is in the spotlight.

More like this
Everything To Know About 'The Hunger Games' Prequel Movie
By Grace Wehniainen and Radhika Menon
Everything To Know About 'Evil' Season 4
By Meguire Hennes
The 'PLL: Original Sin' Creators Say A’s Identity Will Be “Very Clear” By The Season Finale
By Alyssa Lapid
'The Sandman’s Ending Is A Departure From Neil Gaiman’s Comic Book Series
By Kadin Burnett
Get Even More From Bustle — Sign Up For The Newsletter