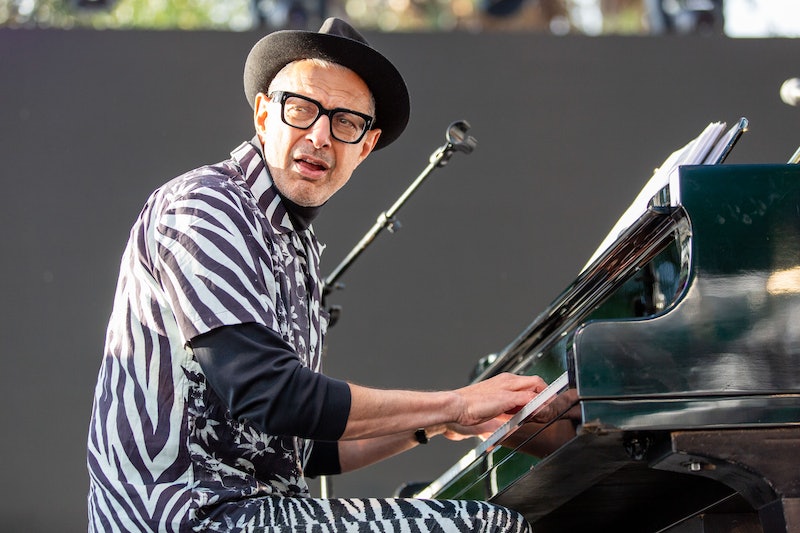 Jeff Goldblum is a bit of a legend in the movie business, having enjoyed a legendary career that is very much still in full swing. But guys, Mr. Goldblum is a man of many talents. As well as being a Hollywood A-lister he's also a very well respected jazz piano player. Yep. And now you know that, I bet you are dying to see him do his thing up on stage. So, the question is, will Jeff Goldblum tour the UK in 2019? I've got the answers below.

Well guys, while Goldblum won't be touring per se, he will be doing two pretty spectacular performances over summer 2019.

First up, the actor will be appearing at the music festival of all music festivals: Glastonbury. He'll be performing on the famous West Holts stage. So, if you're lucky enough to be heading down to Somerset this June, you have to check him out.

But hey, maybe you don't have a ticket for Glastoh. Or maybe the mere thought of a festival (AKA the loos) makes you feel like you are going to have an anxiety attack. Well guys, worry thee not, because Goldblum is also due to do a one-off show at O2 Shepherds Bush Empire on July 1. And guys, there are actually tickets still available for this gig. But you better move fast.

Bustle reached out to Goldblum's reps to find out if there are any other dates we need to know about, and they have confirmed that Glastonbury and the O2 Shepherds Bush Empire gig are all that's in the calendar for now. But we'll let you know if that changes.

Goldblum released an album last year with his band the Mildred Snitzer Orchestra (who are named after a friend of the actor's mother, according to NME). The album, titled The Capitol Studios Sessions was number one in the jazz charts and a bit of a win.

Although Goldblum is best known for acting (mainly his roles in films like Jurassic Park and The Fly), he has actually been in the music industry for a long while too. In fact, according to the Guardian, he's been playing the piano since childhood, beginning with classical piano and then moving onto what became his true love: jazz piano. He has been performing in jazz venues since the age of 15 and has gone on to nab a regular spot on Wednesdays at LA's Rockwell club.

In an interview with Rolling Stone, Goldblum shared how important music is in his day-to-day routine: "I play every day. It's part of my life. I know what gratification comes from a routine and making something a habit and I play first thing in the morning." He went on to explain that music is something that brings him true joy, and has been a constant companion in his life:

"At 10 years old, I had already decided to myself that I was going to be an actor. I wanted that in the worst way but this piano thing, I just purely got a kick out of it. Over the years, I kept involved with music just for the sheer bushy-tailed fun of it."

Are you intrigued? Of course you are. If you want to catch Goldblum live in action, head to Ticketmaster and grab yourself a ticket for the Shepherd's Bush gig before they all sell out.