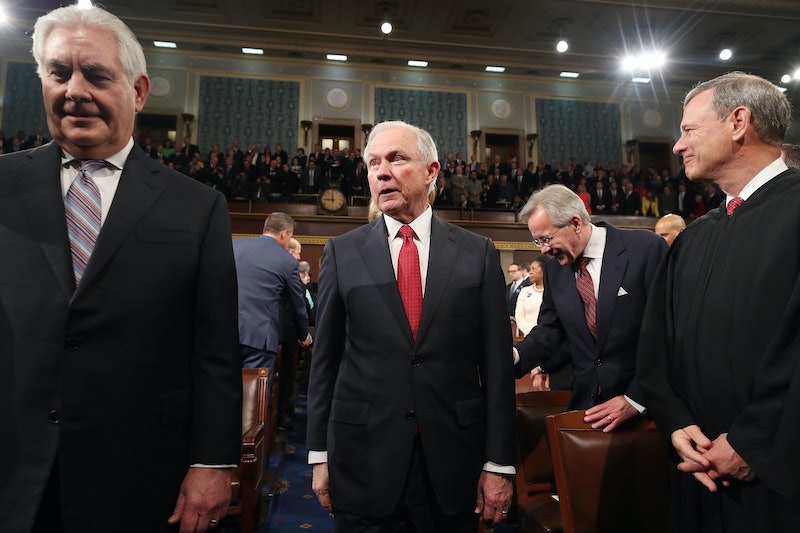 On Wednesday night, The Washington Post was first to report on allegations that current U.S. Attorney General and former Alabama Sen. Jeff Sessions had met with Sergey Kislyak, Russia's ambassador to the United States, twice over the course of Trump's 2016 presidential run. One supposed meeting reportedly occurred in July while another happened in September, the latter of which reportedly occurred in his Senate office. Democrats have already requested that Sessions recuse himself from investigating possible connections between Trump's campaign and Russia. Now that Sessions' alleged meetings have become a topic of discussion, those requests are going to no doubt become much more intense.

In response to the Post's report, Sessions denied meeting with any Russian officials about Trump campaign matters. "I have no idea what this allegation is about," he said. "It is false." His spokeswoman Sarah Isgur Flores also released a statement specifying that the Senate asked him "about communications between Russia and the Trump campaign — not about meetings he took as a senator and a member of the Armed Services Committee."

Prior to this scenario, however, Sessions' ability to preside over Russia probes led by the FBI was heavily questioned for a variety of reasons. And just two days before The Washington Post reported on the alleged meetings between Sessions and Kislyak, the attorney general had already conceded that he would step away from the Russia probe if absolutely necessary. "I would recuse myself on anything that I should recuse myself on," Sessions claimed at the Justice Department on Monday. "That’s all I can tell you."

As early as Feb. 21, for example, Senate Minority Leader Chuck Schumer explaining why he believes Sessions could actually be breaking rules by overseeing the investigation. Referencing the probe into Michael Flynn's conversations with Kislyak, he wrote:

Such an investigation and any resulting prosecution would normally be carried out under the purview of the attorney general, as the nation’s chief law enforcement officer with oversight of the Federal Bureau of Investigation. But in this case, given his deep and long-standing ties to President Trump and many of Trump’s top advisers, Attorney General Jeff Sessions cannot lead such an investigation.

This paired with the fact that Sessions has hinted he would already recuse himself suggest someone else may leading the investigation into the possible connections between Russia and Trump's campaign in the future.