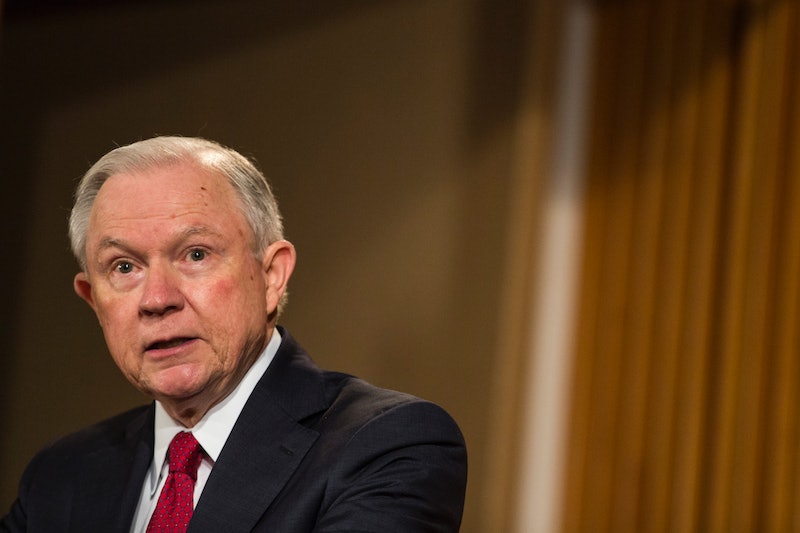 Et tu, Jeff Sessions? The Trump administration's alleged entanglements with Russia continue to expand the further we get into the Republican presidency. Justice Department officials have revealed that Sessions, President Trump's recently appointed attorney general, met privately with Russian Ambassador Sergey Kislyak twice last year. Since these meetings came to light late Wednesday, House Minority Leader Nancy Pelosi has called for Sessions to resign as attorney general. This would follow the trend set by former National Security Advisor Michael Flynn, who resigned last month over his failure to fully disclose the content of his meetings with the Russian ambassador.

The Washington Post reported that Sessions met twice with Russia's ambassador to the United States last year, meetings he failed to disclose when asked pointedly about possible ties between the Trump campaign and Russian officials during his confirmation hearing to become attorney general. Sessions denied meeting with any Russian officials to discuss Trump's campaign in a statement, while his spokeswoman, Sarah Isgur Flores, also claimed that "there was absolutely nothing misleading about his answer" to the Senate regarding Russia.

One of these private conversations occurred in Sessions' office in September, making it a particularly suspect time for such an encounter. U.S. officials have claimed that the fall of 2016 saw the greatest activity around Russia's cyber campaign to alter the U.S. presidential election in Trump's favor. Russia has denied interfering in the elections, however.

So far, no special counsel has been created to investigate Russia's alleged hand in the presidential election. Sessions' conversations with the Russian ambassador may give new reason to do so, however. And if calls for his resignation fall on deaf ears within the Trump administration, he at the very least may finally recuse himself from the Justice Department and FBI's investigations into the alleged Russian hacking, as he oversees both groups.

Sen. Elizabeth Warren discussed the need for such an investigation, tweeting: "We need a special prosecutor totally independent of the AG. We need a real, bipartisan, transparent Congressional investigation into Russia."

She also called for Sessions' resignation, making sure to likewise point out that this is not "normal" or "fake news":

Republican Sen. Lindsay Graham partially echoed these sentiments. He said if the Trump administration is found guilty of wrongdoing, Sessions should recuse himself from the investigation. "There may be nothing there, but if there's something there, if the FBI believes is criminal in nature, then, for sure, you need a special prosecutor," Graham said. "If that day ever comes, I'll be the first one to say it needs to be somebody other than Jeff."

How the Trump administration and respective agencies handle this information over the next few days will likely determine if Sessions will stay or go.