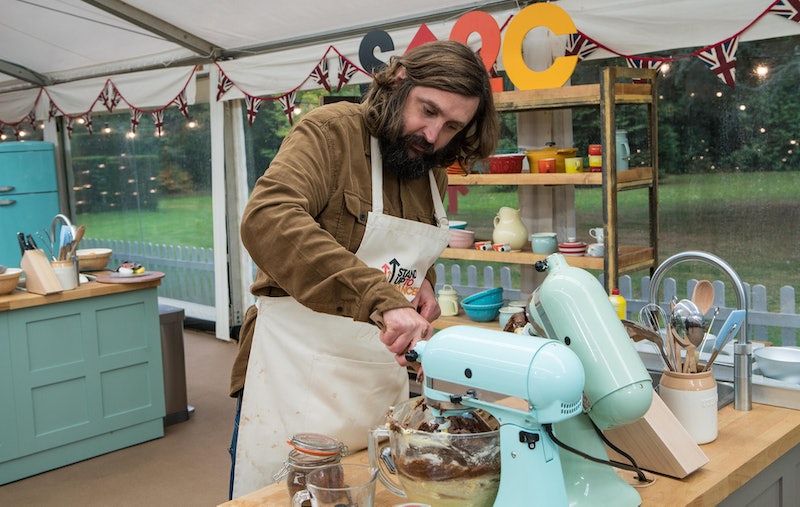 If you can't get enough of Channel 4's Stand Up To Cancer Celebrity Bake Off, you'll be pleased to know that the show continues tonight (March 26) with a bunch of new celeb bakers ready to impress judges Prue Leith and Paul Hollywood. While it's a given that hilarity will ensue, I'm certain that the antics of comedian Joe Wilkinson will have everyone in absolute hysterics. So much so that, by the end of tonight's episode, viewers will probably be wondering whether Joe Wilkinson will tour the UK in 2019 to experience his comedic flair in a larger, less messy setting than the Bake Off tent.

If you aren't familiar with Wilkinson by name, you'll most likely recognise his face from his regular appearances on 8 Out Of 10 Cats Does Countdown as Rachel Riley's assistant, where he has donned a variety of different costumes and characters resulting in some of the show's funniest moments. He's also made regular appearances on other popular panel shows such as Taskmaster and Mock The Week, and he's lent his comedic acting chops to the likes of Miranda, Him & Her, Sex Education, and most recently Ricky Gervais' new series After Life.

But if you're a fan of Wilkinson's work and totally up for seeing him perform in a live setting, I'm sorry to say I have some bad news, as it doesn't seem like the comedian will be going on tour anytime soon. I've reached out to his representative to see whether or not there is a future tour in the pipeline. While I have yet to hear back, you'll certainly be the first to know if I do.

Although, by the looks of it, Wilkinson is pretty overdue for another solo tour as his last one (The Joe Wilkinson Experience) was in 2014, which was four years after his first tour (My Mum's Called Stella and My Dad's Called Brian) in 2011. So, you never know, seeing as Wilkinson has become more of a familiar face this past year, a third tour wouldn't come as a surprise.

At least in the meantime you'll be able to enjoy his comedic stylings while he tries his hand at baking, something that he's admitted to having little-to-no experience with. "I practised the biscuit challenge and my wife said 'what the hell are you doing?' and that is the extent of my education with baking," he told Channel 4. "[S]o it's by the seat of my pants, which is probably the best."

And while Wilkinson may not be the best baker to ever grace the Bake Off tent, he is a big fan of the series. "It's just a great way to spend your evening watching other people bake," he said. "You invest quite a bit into the characters and you always lose your favourites early, it's heart-warming telly." I mean, what's better than having a laugh on a show you enjoy while you raise money for such an important cause?

You can watch Stand Up To Cancer Celebrity Bake Off tonight (March 26) on Channel 4 at 8 p.m.

More like this
Joey Essex Has Signed Up For 'Dancing On Ice'
By Darshita Goyal and Sam Ramsden
The 'GBBO' Mexican Week Controversy, Explained
By Sam Ramsden
Hamza Yassin’s Love Of Dance Started At Scottish Ceilidhs
By El Hunt
Ekin-Su & Davide’s ITV Travel Show Finally Has A Name
By El Hunt and Sophie McEvoy
Get The Very Best Of Bustle/UK