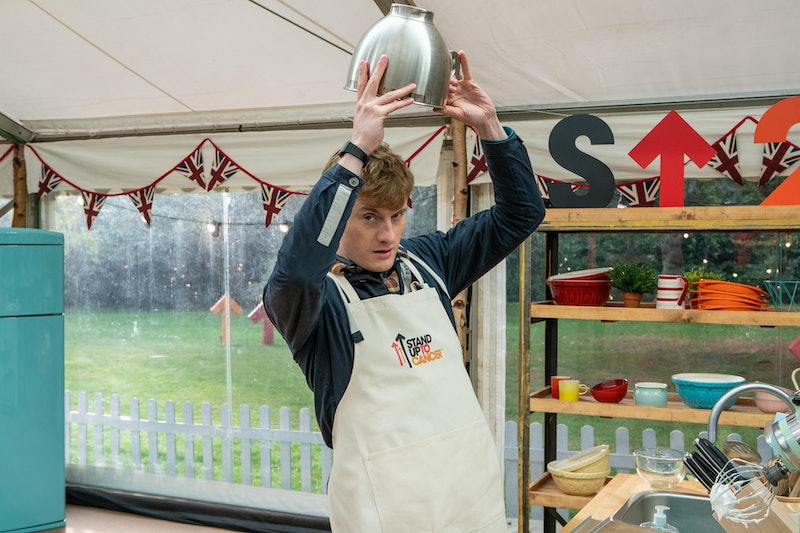 Channel 4's Stand Up To Cancer Celebrity Bake Off continues tonight (March 12) with a fresh batch of contestants ready to knead, glaze, and whisk their way towards victory. Tonight's show is set to be especially funny, as a seasoned comedian James Acaster steps up to the plate (literally). But for those who need more than an on-screen appearance, and are dying to see this man live in action, I have good news about whether James Acaster will tour the UK in 2019. Get your wallets at the ready.

Acaster is comedian from Kettering with his very own stand-up show on Netflix called Repertoire. This comedian has built a name for himself off the back of his perfectly timed wit during appearances on BBC's satirical panel show Mock The Week and his stints on Never Mind The Buzzcocks and 8 Out Of 10 Cats Does Countdown.

The good news is that Acaster is definitely hitting the road again for a world tour this year. The comedian announced his 2019 tour in October last year, as comedy site Chortle reports. The monumental tour, entitled Cold Lasagne Hate Myself 1999, will take place across dozens of locations in the UK, the States, and Australia, and tickets are available via the comedian's official website.

Acaster's description of the show is as follows:

"One time I bought a lasagne from the supermarket, heated it up in the oven and ate a bit of it and it wasn't very nice so I put it in the fridge because it felt wrong to dump a whole lasagne in the bin and then later on I ate a spoonful of the cold lasagne because I was drunk and it was absolutely delicious. It was 4am. I then changed the name of a WhatsApp I was a part of to COLD LASAGNE HATE MYSELF 1999 because I had been thinking a lot about how 1999 was the best year of my life and also about how much I hate myself sometimes. The next day I was asked to name my new show. Come along."

Acaster is just about to begin the American leg of the tour (stopping off in Brooklyn, Chicago, and Portland along the way), but UK fans need not worry — he'll be back on May 23 for a gig in Nottingham, followed by a more shows around the country over summer and all the way through until Christmas! Other cities he'll be visiting include Newcastle, Cambridge, Oxford, Birmingham, Bristol, Glasgow, Hull, Leeds, Reading, and many more.

Acaster has gone from strength to strength over the past few years, and recently released his first book, James Acaster's Classic Scrapes, which gained a place on the Sunday Times best-seller list. He also has a comedy-documentary series on Youtube called Sweet Home Ketteringa, which takes him back to his old stomping ground in Northamptonshire. Acaster has won 2 Chortle Awards and has been nominated five times for Best Show at the Fringe by the Edinburgh Comedy Awards.

I'm not certain that baking will be Acaster's calling, but comedy certainly is. Get your tickets before it's too late.