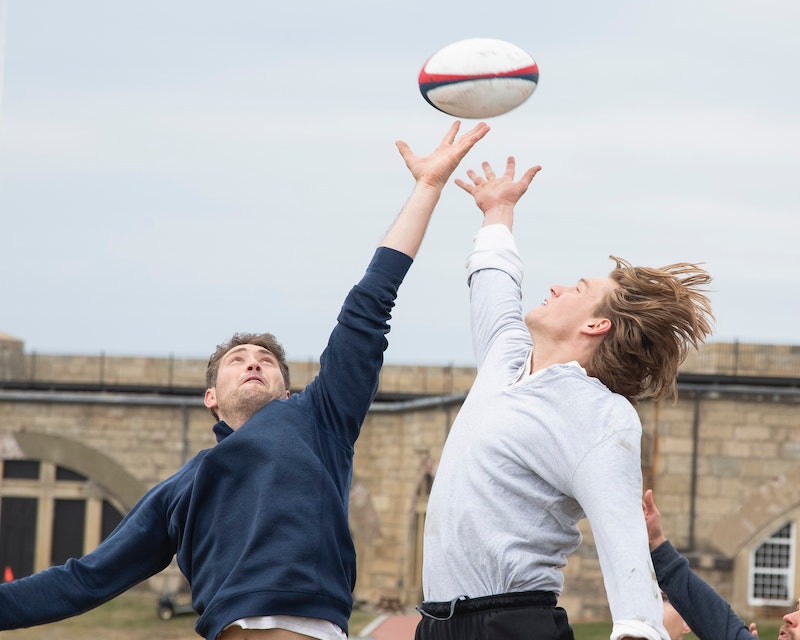 John Paul Jones has made a name for himself on The Bachelorette by, well, uh, just being himself. He can ride a unicycle. He insists on people calling him "John Paul Jones," not "John Paul" or "JPJ" or just "John" (what's so wrong with John?!). And as we saw during the Mr. Right pageant, he knows how to rock a speedo. But despite — or more aptly, because of — his fun, light-hearted nature, it seems more likely that John Paul Jones will be on Bachelor in Paradise than that he winds up with Hannah B.'s final rose.

According to his ABC profile, John Paul Jones — who, again, is only called "John Paul Jones" — is a 24-year-old financial analyst from Maryland looking for love in all the wrong places (that wrong place is always reality television. Always). He says that when he's not "daydreaming about his future wedding," he likes traveling and "contemplating the meaning of life." He also loves champagne and long words. The future cast of Bachelor In Paradise — whenever they're announced — might not be able to handle three-plus-syllable words like John Paul Jones can, but he still has a good shot at winding up down in Mexico with them.

ABC has done things a little differently for Hannah's season, including announcing more men than actually got on the show as contestants and having Hannah hand out a rose on live television during Colton's After The Final Rose. One thing they won't do, though, is announce the cast of Bachelor In Paradise before the current season of The Bachelorette is through. Because so much of the Bachelor In Paradise cast comes from the two prior seasons of The Bachelor and The Bachelorette, saying, "Hey, these are all the people on the new show who haven't yet been kicked off the old show," would be way too spoilery. Bachelor blogger Reality Steve reports that John Paul Jones is, indeed, on the shortlist for Bachelor In Paradise, but it's way too early for ABC to make any official announcements about the cast.

All of that said, it would be surprising if John Paul Jones wasn't on Bachelor In Paradise, because if there's one thing this guy is, it's a character. Let's assume that he and Hannah don't end in a love match — John Paul John insists on a special moniker, talks about loving champagne and multisyllabic words, and has long, flowing hair. He's carved out his own niche just like Alexis Waters the dolphin/shark or Grocery Store Joe. Love him or hate him, everyone knows John Paul Jones.

He's kind of strange (not in a bad way, but in a "is he serious?" way), and that makes him recognizable and probably beloved by fans. So unless John Paul Jones decides after The Bachelorette that he wants to go back to his simple life of financial advising and living in a Maryland suburb, expect to see him talking to crabs and raccoons (sorry, Clare) in Mexico. He could be the new Ashley Salter — a little off-kilter, but plenty of fun.