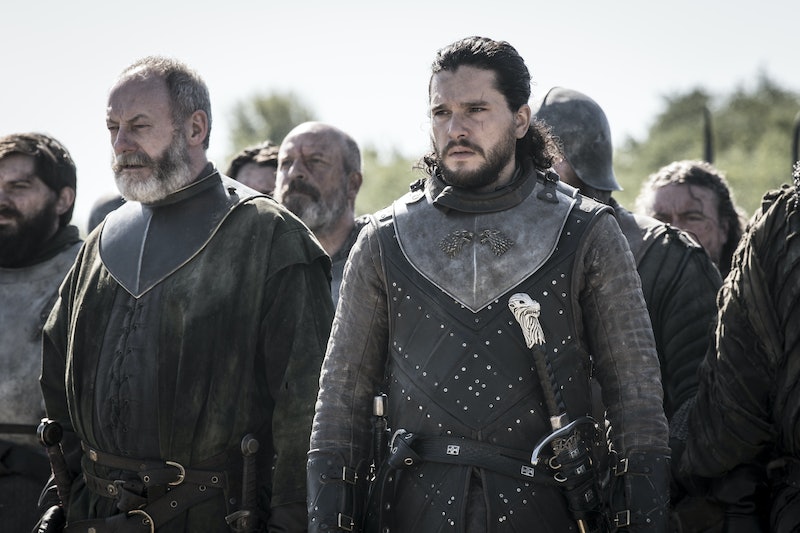 Game of Thrones throwing out major twists and drama is nothing new. But the show seems to have gone completely off the rails for this final season. Spoilers ahead for GoT episode 5, Season 8. In the May 12 episode, "The Bells," Daenerys completely leveled King's Landing, Cersei died in the arms of Jaime, and Arya almost died in the middle of it all. And, after all this chaos, some fans are convinced that Jon will kill Daenerys in the Game of Thrones finale because of what she did to the people of King's Landing.

While it's definitely a possibility, it's not that likely, considering all the major foreshadowing episode 5 did to hint at Arya being the one to kill Daenerys. However, there is some evidence to suggest that Jon will be the one to deliver the final blow. Jon has been in love with Daenerys since the end of Season 7, and even since learning she's his aunt, he's still stayed loyal to "his queen." Through Varys' execution and Battle of King's Landing, Jon has remained loyal. However, towards the end of episode 5, it was clear to see when Jon's loyalty started to turn to horror as Dany burnt the whole city to the ground, even after Cersei's army had surrendered. That horror could be enough to convince Jon that he needs to kill Daenerys if she continues in her Mad Queen ways, and here's why.

In the beginning of the episode, Varys caught Jon alone, and they talked about Daenerys' mental state after losing Missandei and Rhaegal. Though Varys didn't outwardly tell Jon he knew about his Targaryen parentage, he made it known nonetheless. He also told Jon that all he's ever wanted is for the right person to be on the Iron Throne. Jon told him what he's told everyone — he doesn't want it — but Varys was adamant that he thinks Jon would "rule wisely and well."

Jon was set on backing Daenerys, but after watching her vicious attack on King's Landing, one can't help but wonder whether or not he's giving Varys' words a bit more thought.

Jon's Reaction To The Burning Of King's Landing

Jon was very clearly horrified by Dany's desire to keep the assault on King's Landing going even after Cersei's army surrendered. And though he fought back when necessary, for most of the attack he witnessed the same horrors as Arya: families being torn apart, children losing their mothers, and Daenerys not giving a care about any of it.

Jon is nothing if not a man of utmost honor. To defy a surrender is not OK in his book, and he's most likely going to have some strong words for Daenerys next episode, at least.

Jaime had the nickname "King Slayer" up until the very end (thanks to Euron for the reminder), and that's due to the fact that he killed the Mad King decades ago, after Aerys started going crazy for bloodshed. As Vanity Fair pointed out, Jaime killed the Mad King after begging him to surrender multiple times, a situation that clearly parallels the position Jon finds himself in now. He could very well make a fateful choice to end Dany's life to save Westeros from another "mad" Targaryen ruler.

Whether you think it's Jon Snow who will kill Daenerys or someone else, it does seem safe to say that the Dragon Queen's days are numbered. And with one episode left, she'll likely die before it's all over.

More like this
Alicent's Green Dress In 'House Of The Dragon' May Be An Act Of War
By Kadin Burnett
Nicola Coughlan Shared A Lady Whistledown Excerpt From ‘Bridgerton’ Season 3
By Grace Wehniainen, Alyssa Lapid and Sam Ramsden
This Episode 6 Moment Foreshadows Viserys' Fate On 'House Of The Dragon'
By Grace Wehniainen
'House of The Dragon' Episode 6 Will Take Place A Decade After Episode 5
By Kadin Burnett
Get Even More From Bustle — Sign Up For The Newsletter