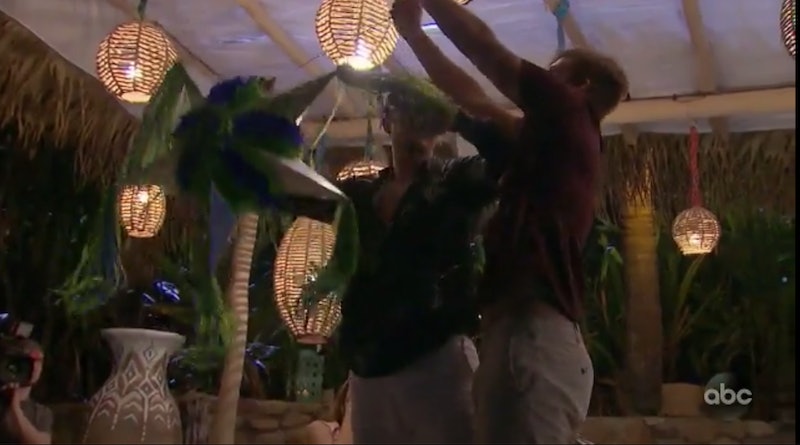 "The most shocking confrontation" in Bachelor In Paradise history finally aired. Well, kind of. Tuesday night's episode was left on a cliffhanger after Christian and Jordan got into a fight. And given how intense it looked, that might mean they both end up going home. BiP has tolerated a lot of things, but violence isn't one of them.

It all started when Clay attempted to steal Nicole away from Christian and Christian wasn't having it, so Jordan took it upon himself to step in. Why? Because "the bad guys can't win." So, Jordan approached him, ripped down his piñata, and ended up in a full-on physical altercation.

"Sorry boys, it's over," Christian said when he arrived in Paradise with a date card in hand. He chose to take Nicole on her third date of the season and it was, in a word, sexy. He wooed her with his Latin charm and wasted no time before leaning in for a steamy kiss. "What does Clay have that I don't?" he asked Nicole. She foreshadowed his fight when she said, "I feel like you'd get me in trouble."

When they got back to the beach, Clay pulled Nicole aside to catch up, and then Christian appeared, expecting to "finish" their date. Things got tense quickly. "You can have her tomorrow," Christian said, asking Clay to step away. "I just wanna finish it." Nicole watched in silent shock before she ultimately told Christian she wanted to continue talking to Clay, which got him to leave, temporarily.

Before they knew it, it was time for the women to hand out roses, and at the cocktail party, Christian pulled Nicole to the side to chat. In an effort to be more assertive at the request of Nicole, Clay tried to intervene, but he was just too nice. Jordan, on the other hand, is not.

Jordan already had a bit of a testy history with Christian. They were both on Becca's season of The Bachelorette, and though Christian was sent home on night one, he had a lot to say to Jordan during the Men Tell All — and Jordan shot right back at him. "This is your moment, right? You're accosting me so you can get some camera time," he told Christian. "You’re a joke."

That said, Jordan had no problem butting into Christian and Clay's drama. Remember his giant stuffed dog toss from Season 5? He attempted to recreate that with Christian's piñata, but when he reached for it, Christian intercepted, so Jordan grabbed his arm and body slammed him to the ground.

In the preview shown at the end of Tuesday's episode, it looks like there's more chaos to come. Producers intervene, and other cast members look concerned. "They're like, really fighting," Caelynn says. Christian also shared a clip of the fight on Instagram with the caption, "ITS NOT GOOD TO WAKE A SLEEPING LION." Right now, it's unclear whether or not the lion got sent home, but papa Chris Harrison will definitely have something to say about all this come Monday.