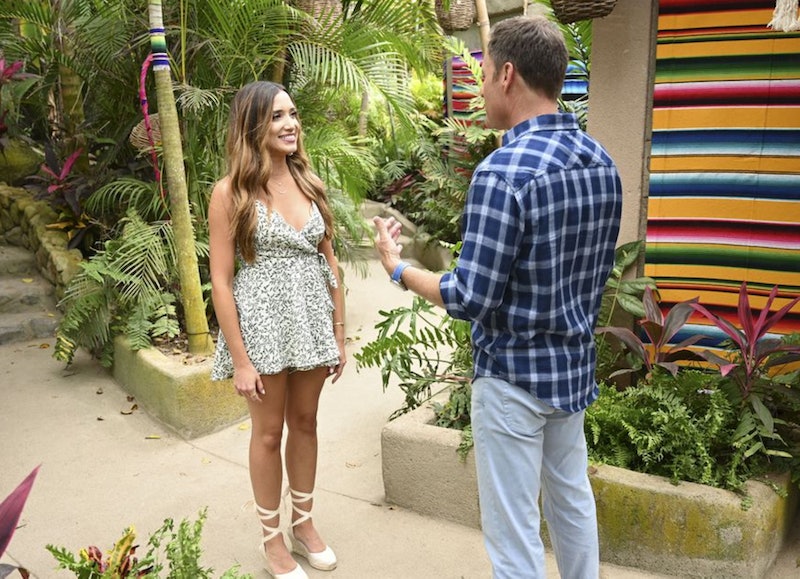 When life handed Nicole Lopez-Alvar a zipline date, she made lemonade that was infused with a truly smashing reference. After seeing herself in Monday's zipline scene, Nicole from Bachelor in Paradise made a Wild Thornberrys joke on Twitter that is Thorn-very excellent. She posted some photos from that evening’s Bachelor in Paradise episode next to some screengrabs from late ‘90s/early ‘00s Nickelodeon animated show The Wild Thornberrys and shared her astute observation. "I FINALLY REALIZED... I AM NIGEL THORNBERRY," she wrote. Try to find the lie. Oh wait, you can't.

Just in case you missed Monday evening's installment of The Bachelor spinoff and are dying to know how and why a zipline scene on Bachelor in Paradise led to a gorgeous Wild Thornberrys reference, here is a little context: At one point in the episode, Nicole and fellow Bachelor in Paradise contestant Jordan Kimball went on a date. During said date, they went ziplining. As she noted on Twitter, Nicole is "DEATHLY AFRAID" of ziplining. She closed her eyes, took some deep breaths, and pretended she was not ziplining. As they zoomed through the treetops, GoPro cameras documented their flight… at what some may call a less-than-ideal angle. The fisheye filter combined with Nicole's genuine fear of ziplining sure did produce some memorable footage, and wow, did Bachelor Twitter ever run with it.

She was compared to a Funko Pop figurine. There were references to Mr. Electric from The Adventures of Sharkboy and Lavagirl in 3-D. There were jokes about the fish tube. But the greatest tweet about The Zipline Face? That award goes to the artiste behind The Zipline Face.

Nicole did the best thing a person could possibly do in this particular situation: She compared herself to the patriarch of the Thornberry family, Nigel Thornberry.

Give her a khaki cargo shirt and keys to the ComVee, and she's ready to host her very own wildlife show and call her loved ones "Poppet." Nigel, er, Nicole is having a good time with these ridiculous screengrabs, and thank the stars above for that. It would have been a real bummer if she pretended like The Zipline Face never happened. And it would also be a real bummer if she never got around to tweeting not one, but two Nigel Thornberry photos next to screengrabs of her own face.

When one fan tweeted that it is cool that she can poke fun at herself, Nicole replied, "Laughing at yourself > ."

Bachelor Nation star Demi Burnett also shared how she felt about the zipline scene: “I AM SCREAMING AT THESE GO PRO SHOTS OF NICOLE ON THE ZIPLINE HAHAHAHAHA THEY DID HER SO DIRTY I CANT BREATHE #BachelorInParadise love u Nicole.”

If Nicole ends up on the next season of Bachelor in Paradise, what are the odds she's dressed up like Nigel Thornberry in the opening credits? This show has yet to meet an opening credits bit it did not love, and Nicole-as-Nigel Archibald Thornberry skipping down the beach to "Almost Paradise" would be nothing short of smashing.