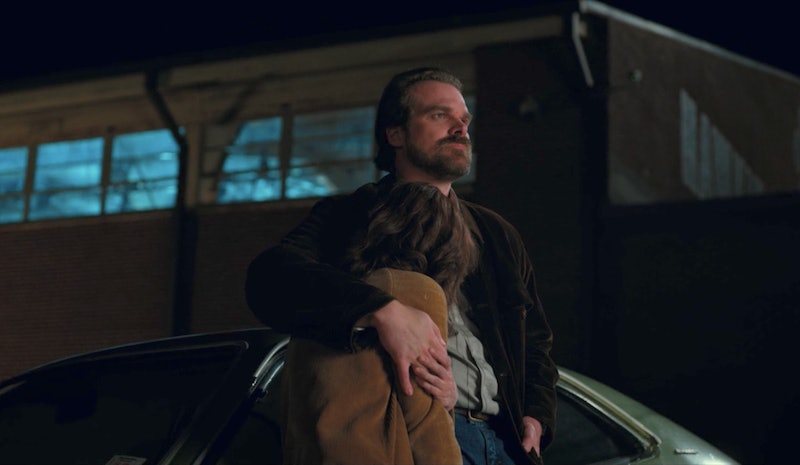 If Stranger Things were just about monsters and alternate dimensions, chances are it wouldn't have the fandom that it does. But the Netflix series gives fans plenty of other stuff they really want: great hair, cute kids with potty mouths, and a variety of 'ships to choose from. But the bad news for Stranger Things fans who 'ship Joyce and Hopper (Season 2 spoilers!) is that this most recent season kept the two in platonic territory. With Winona Ryder's Joyce finally getting the faithfulness and caring that she never got from Lonnie in her relationship with her new boyfriend Bob (Sean Astin) and Hopper playing dad to Eleven in secret, there wasn't much chance that they'd take their friendship to the next level. But the two did have some intimate scenes, like when they shared a smoke together in the parking lot like they used to in high school, that have kept hope alive for the most hardcore Jopper 'shippers. And perhaps no one wants Joyce and Hopper to get together more than the man who plays Hopper himself, David Harbour.

If you follow Harbour on social media (And if you don't, why not?), you know that he's an even bigger fan of Stranger Things fan than you are. Since the latest season dropped on Netflix, he's been having fun with fans and his co-stars online — he even roped himself into taking senior pictures with one admirer after daring them to get a certain number of retweets. Harbour has also made his support of Jopper very clear. He even has 'shippy head canons, just like you. Check out this angsty flashback concept:

When a fan replied to ask where Bob was during that fantasy prom, Harbour answered, "Studying for midterms" with the geeky smile emoji. Another fan pressed for more detail, and the actor hinted at that shared history that some viewers are sure Joyce and Hopper have.

The actor also injected some Jopper context into what instantly became one of his character's most iconic scenes. While they're cleaning up his grandfather's old cabin, Hopper decides to share some "real music" with Eleven. He puts on a little Jim Croce and then... dad dancing. Such dad dancing as you have only ever seen at family weddings. That glorious moment immediately inspired a fan account that sets Hopper's "white man's overbite" to a variety of other tunes. Harbour has one specific song in mind for a future Hopper dance scene, and he proposed (like, directly @-ed the writers) that he do this "somewhere near Joyce Byers." He's basically writing his own Joyce/Hopper fan fiction on Twitter, for all the world to see.

I mean, check out these lyrics. Is this their song or what?

"I'll give a little bit

I'll give a little bit of my life for you

So give a little bit

Give a little bit of your time to me

See the man with the lonely eyes

But Twitter isn't the only platform through which Harbour has made his 'shipping allegiances abundantly clear. On the Beyond Stranger Things Netflix after show, the actor gives his take — as Hopper — on Joyce's relationship with Bob. To put it mildly, he's not a fan. Harbour says:

"Does Hopper think that Joyce and Bob are a good match? I would say absolutely not. I mean, look, I get the impulse that she’s following. She was clearly in a very destructive relationship with Lonnie and she’s clearly very protective of Will and so she’s sort of chosen this guy that’s gonna be very nice to her and very nice to Will and sort of be a good, dorky father figure. But you know, the fans, they call it like "Jopper" or something, they all 'ship this relationship of Hopper and Joyce, and I do too. I feel like they’re two really lonely lost people who really need each other."

He goes on to compare their dynamic to Jack Nicholson's private detective character and Faye Dunaway's suspicious wife in the 1974 movie Chinatown. He also says that he lobbied the writers to get the high school friends together by the end of this season, but realized it would be a pretty "jerk" move for Hopper to come on to Joyce when Bob's body was barely cold. Still, Harbour can't resist getting in one more dig at the dorky Radio Shack manager.

"The short answer of it is that I do think the sex would be a lot better with Hopper than it is with Bob," he says. Shots fired.

So, Joyce and Hopper 'shippers, you may not have gotten the satisfaction that Jancy (Jonathan/Nancy) and Mileven (Mike/Eleven) fans got this season, but you've got a very powerful ally in your corner. Because it sounds like David Harbour isn't going to leave the Stranger Things writers alone until Jopper is finally real.

More like this
Caleb McLaughlin Details Racism From 'Stranger Things' Fans
By Radhika Menon
Nicola Coughlan Shared A Lady Whistledown Excerpt From ‘Bridgerton’ Season 3
By Grace Wehniainen, Alyssa Lapid and Sam Ramsden
Shonda Rhimes' Net Worth Makes Her One Of The Wealthiest People In TV History
By Hugh McIntyre
'Firefly Lane' Season 2 Will Be The Show's Last — But There's A Twist
By K.W. Colyard and Grace Wehniainen
Get Even More From Bustle — Sign Up For The Newsletter