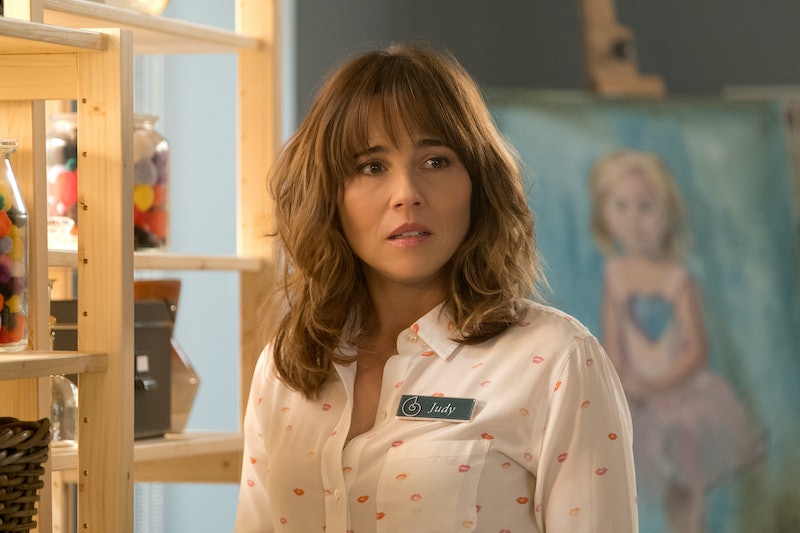 Spoilers ahead for Dead To Me Season 1. Netflix's Dead To Me is technically a dramedy, but it's also a twist-filled thriller. The prevailing mystery revolves around Jen's (Christina Applegate) husband Ted, who was recently killed in a hit-and-run. Though Jen doesn't find out who did it until the very end of the season, viewers learn early on that it was Judy (Linda Cardellini), a woman she meets at a grief support group and becomes close friends with. For fans, then, the bigger question throughout the season is if Judy will get caught by the police, who are actively investigating the case.

It's emphasized throughout the series that hit-and-runs without any witnesses or evidence are extremely hard to solve. Because of this, it seemed for most of the series that Judy would be in the clear. She wasn't the only one in the car that fateful night — her cold, self-serving fiancé, Steve (James Marsden), was in the passenger's seat, and he was the one who prompted her to keep driving rather than to seek help for Ted. Throughout the season, he and Judy take several measures to cover up their crime. They even dismantled the car and sent the parts to different junkyards, thinking "no car, no crime." Steve did so because he wanted to avoid any consequences; Judy did so because she didn't want to risk losing Jen as a friend, after they'd become so close.

However, in Episode 6, a piece of Judy's headlight was found, making it way more likely that she'd be caught. And with the pressure on, Steve crumbled. He told Judy that it was solely her fault and he'd testify to that. It was clear that he'd do anything to save his own skin. That revelation broke Judy. She always had a soft spot for Steve, but in that moment, she saw him for who he truly was. So Judy marched down to the police station in Episode 9. Only she didn't confess. Instead, she ratted Steve out for money laundering. While detectives investigated Steve's storage unit filled with evidence, they found a puddle of grease on the floor. You could tell that the detective was putting two and two together that the car that hit Ted was once housed in the same storage unit.

The money laundering investigation actually put the hit-and-run investigation on hold. In the final episode, the detective told Jen that they basically had their hands tied. They needed to resolve Steve's money laundering case before they could look into his involvement in the hit-and-run. The detective told Jen that it's not even enough that Judy confessed (because she finally, finally did to Jen in Episode 9). The cops need more evidence order to process the case.

But all of that may not matter anyway, because by the finale, Jen had committed her own murder. She killed Steve and called Judy for help. The series ends with them looking at his body floating in Jen's pool. The show has yet to be picked up for a second season, but more episodes would likely change the core question from "Will Judy get caught?" to "Will Jen get caught?" It remains to be seen what the women will do. Will Jen claim self-defense? Will Jen and Judy try to cover up the murder?

If Jen claims self-defense, she could say she found out that Steve killed her husband and was protecting herself. Then the cops can neatly wrap up two cases in one. That would allow both Jen and Judy to escape punishment and the detectives to move on to other things. It's basically a win-win for everyone but Steve, but he's dead anyway, so that's kind of irrelevant.

Judy's decision to not stop after the accident wasn't right, but you kind of can't help but root for her to be OK. Nobody wants to see Judy in jail (not even Jen by the end), so don't expect her to get "caught" in Season 2, either. The threat of her going to prison may hang around for a few more episodes to keep things interesting, but at the end of the day, this isn't a prison show. It's more about Judy and Jen's friendship, and the way they work through grief together. Hopefully that will remain at the show's core if it comes back for more episodes.