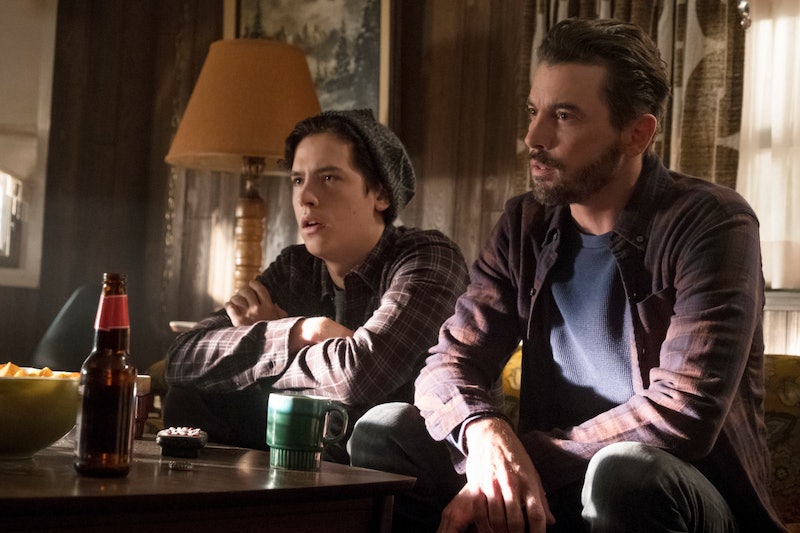 Spoilers ahead for Riverdale Season 3, Episode 15. Riverdale fans knew Gladys was trouble when she walked in. She may have claimed to be coming back to town to reunite her family, but she's been acting shadier than ever. And now that Jughead knows the truth about what she's been up to, it feels like only a matter of time until FP finds out about Gladys' drug scheme on Riverdale.

Gladys' return may have fooled FP and Jughead for a while, but viewers knew she was up to something from the minute she rolled into town. She was initially there to pick up the drug manufacturing equipment she bought from Hermione Lodge, but when Veronica admitted she burned it, Gladys decided to stick around anyway. It soon became clear why — she was plotting something and Jughead's sister JB was in on it.

"Everything's going just how you said, Mom. I've got dad wrapped around my pinky," JB said when they first arrived back. Gladys replied, "You're his weakness, baby, which means we've got the whole town, JB. Your old man's the sheriff, the mayor owes us serious cash, hell, even her daughter's working for me now. Oh yeah, we moved to the right place at the right time."

Even without the Lodges' equipment, Gladys eventually found her way back into the drug game in Riverdale. (Seems like she was behind the school's chemistry lab robbery, huh?) On Wednesday night's episode, Veronica fessed up to Jughead that his mom was running the operation now instead of her dad. Jughead immediately went to confront his mom about it. She confirmed it, but made up a story about how it was for the betterment of their family.

"[FP and I] did our best and we survived and now we're moving to Elm street which is all your father ever wanted," Gladys said, referring to how she bought Betty's old house for the Jones family to live in. She said that this business was her way of providing for her family and letting them have the American Dream. And then she told Jughead not to tell his dad, because it would break him.

There was a moment during Jughead's speech at FP's 50th birthday where it looked like Jughead would spill the beans. He didn't, but that doesn't mean he decided to go along with Gladys' scheme. As soon as he was alone with Betty, he confessed his true plan: "Save Jellybean, protect my dad, and run my mom out of town."

It looks like puts this plan into motion as soon as next week. The synopsis for the March 20 episode of Riverdale says that "Jughead makes a surprising move against Gladys," but it doesn't appear that move is successful, because he's also shown in the preview for that episode looking seriously worried and asking Betty, "What are we going to do?"

However, if at first you don't succeed, try, try again. That's exactly what Jughead does, because the synopsis for the March 27 episode says that "Jughead's attempt to put a stop to Riverdale's drug trade puts him on a collision course with Gladys." It's clear that Jughead won't rest until his mom is out of Riverdale. He knows his dad has worked too hard to get his life on track to have it brought down by an illegal drug operation.

Still, he probably won't tell FP about it, since he won't want to put his father in a position of having to choose between his sheriff job and his wife. There is always a chance FP will find out another way, but he seems pretty firmly in the "I trust my wife" camp. JB was right that he's wrapped around her finger. He's so excited to have his family back together that he can't really see past it to what Gladys is actually up to.

Fortunately, FP has Jughead to help with that, and the younger Jones will stop at nothing to make this threat to his family go away. Gladys may be his mom, but she's also a pretty toxic presence in the Jones' lives. Here's hoping Jughead can take care of her scheme without getting his dad caught up in it. FP has gotten his life right, and he doesn't deserve to be dragged back down after all that.