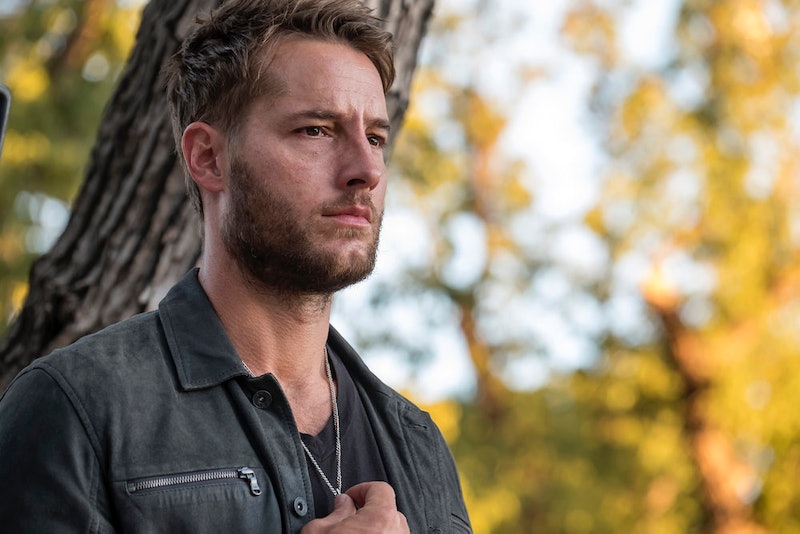 Oh, Kevin. Kevin, Kevin, Kevin. How did we get to where we are now? In Season 1 of This Is Us, Kevin Pearson was a flailing actor, but now, he is just failing. He dumped the love of his life (again), he lost all of his jobs (presumably, since we haven’t seen him on a set in weeks), and he’s battling a hardcore addiction to painkillers and alcohol. And it’s that last matter that launches Kevin into major situation on the This Is Us Season 2 fall finale. Will Kevin go to jail on This Is Us? His DUI arrest may be the wakeup call he needs to get clean — but it's not going to come easily.

There was no plateau for Kevin here in this storyline — he went from seemingly relatively normal guy to a guy who banged up his knee and starting taking more pills than was advised. We’re way past that now, and Kevin, who has literally been screaming for help all season long, hit a breaking point when he found out his sister Kate lost her baby. After driving all night, he chugged vodka at Randall’s house and then jumped back in the car to go… who knows where. This would be very bad on a good day, as opting to drunk driving is a stupid, stupid decision, but as Kevin careens through the streets of New Jersey, it gets worse — his niece, Tess, feeling that his uncle needs some cheering up, snuck into the back of his car! And she’s not wearing a seatbelt!

I had visions of both of them dying in a horrific accident, but luckily, This Is Us (for once) didn’t go there. Instead, Kevin got collared for a DUI, which is great. It’s the best thing that could have happened to him, honestly, because Kevin has been acting out for a while and no one has noticed. And yes, I know that Kate just lost her baby and Randall is dealing with his foster daughter, but Kevin’s addiction was manifesting before either of these things were happening. Randall is the only one who even looked at Kevin differently. And Sophie? Sophie is a nurse, and she didn’t recognize the signs of addiction. Sometimes, though, no matter how hard you try, you can’t see what's right there — and it certainly isn't Kevin's family's fault for not helping him earlier.

Something makes me think that Jack would have been able to pinpoint his eldest boy’s troubles, though. After Kevin’s accident in high school, Jack tells a teenage Randall, “That’s the thing about three of you — there’s always a blind spot. I’m with one of you having a great time, and bam — something happens to the other and I realize that I should have been looking in that other direction. It’s been that way since you guys were babies. You know, one of you falls down, and the other is standing up.”

So now what happens to Kevin? To start, his family will know what he's been struggling with and will hopefully hold him accountable. Since they dealt with this with their own father, they may be able to help him in his recovery. (Of course, Kevin has to help himself first by seeking the help he needs.) He should also be thankful that he didn’t hurt or kill Tess or anyone else, and he should be charged for his crimes. This DUI arrest is Kevin’s ultimate cry for help — he’s been begging for attention since the beginning of Season 2, but everyone else has been too busy or hurt in their own way to notice. Kevin has hit rock-bottom, and what he needs now is to rebuild his life. That means facing everything that’s ugly or hurtful — his feelings about his father’s death; Kate’s miscarriage; his fraught relationship with Randall; the fact that he was never able to have a football career because of his injury. Kevin, as a first-time DUI offender, will probably not go to jail. But he's not going to get off scot-free.

According to Black's Law Dictionary, "[A] first-time misdemeanor DUI charge, having no aggravating factors, usually receives little or no jail time." Instead, Kevin may be able to expect some or more of the following: "Community service, driver's license suspension, and mandatory alcohol/drug education and rehabilitation programs." So, hiding his addiction is a thing of the past, and now he will have to start all over and hopefully finally get the help he needs.

More like this
Billie Piper Just Confirmed 'I Hate Suzie’s Festive Return
By Kayla Blanton and Shahed Ezaydi
Yes, Billboard Queen Angelyne Really Ran For Governor Of California
By Brad Witter
50 Years After Creating Her Alter Ego, Angelyne Is Still Driving That Pink Convertible
By Gretchen Smail
Penn Badgley & Leighton Meester Met On A Horror Movie Set Before 'Gossip Girl'
By Jake Viswanath
Get Even More From Bustle — Sign Up For The Newsletter