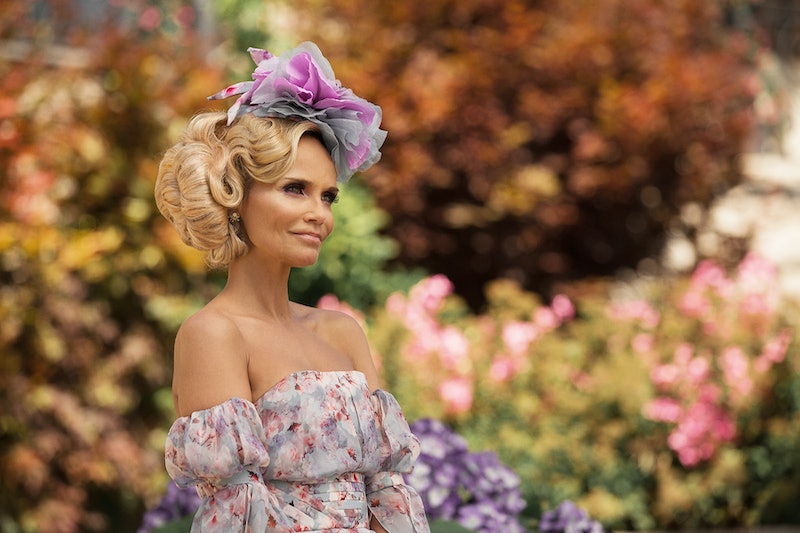 As a quick refresher, Season 1 followed Shadow Moon fresh out of prison. His wife, Laura (Emily Browning), had just been killed in a car crash, and he began working for a mysterious man named Mr. Wednesday. Things got even more bizarre when a leprechaun named Mad Sweeney (Pablo Schreiber) gave Shadow a magical gold coin, which he then dropped on his wife's grave.

From there, he learned about the gods — both old and new — who had come to America, such as New Media (Kahyun Kim), Mr. World (Crispin Glover), Bilquis (Yetide Badaki), The Jinn (Mousa Kraish), and Technical Boy (Bruce Langley). Mad Sweeney realized that he gave Shadow the wrong coin, causing him to team up with Laura (long story), who'd been killed by Mr. Wednesday. Viewers also learned that he was really the ancient god Odin.

But although Chenoweth brought a lot of star power to the fantastical series, the Wicked performer was only in one episode — "Come to Jesus" — where she played an ethereal, Germanic god named Easter. The god lived in Kentucky, as audiences learned, and although her name was technically Ēostre, per Vulture, she adapted Christian beliefs to remain relevant. "I'm very proud to be in it," she told Conan O'Brian of American Gods in May 2017, describing her character as "the goddess of the Earth and Fertility.... She's got a little mad that Jesus has decided to resurrect on her special day."

And although Chenoweth was nothing less than spell-binding in her episode, she won't be returning to the Starz show. In fact, there were several cast and crew changes between American Gods Seasons 1 and 2 — the most significant one being that showrunners Bryan Fuller and Michael Green left the series in late 2017, per Variety. At the time, it was speculated that the two men had hit an impasse with producer FremantleMedia over both financial and creative differences, the article detailed.

As a result, Chenoweth told TVLine that she wouldn't be returning for Season 2. "I couldn't come back without [Fuller]," she said. "It wouldn’t be right." And Chenoweth isn't the only one who won't be in American Gods Season 2. Gillian Anderson announced in early 2018 that she wouldn't be returning, either, per TVLine. The actor starred as the god Media, who channeled pop culture icons like David Bowie, Lucille Ball, and Marilyn Monroe throughout Season 1.

"We actually plucked [Easter] early," Gaiman told Variety, saying that they never planned to have the character in Season 2 to begin with. "Somewhere up the line we're going to meet Easter again. Whether or not we get Kristin or someone else remains to be seen." According to Variety, Jesse Alexander is the Season 2 showrunner, and author Gaiman is still involved as an executive producer.

All that said, American Gods Season 2 still looks to action-packed — with the Old and New Gods ramping up for their all out war — even if Easter won't be returning in all her floral glory.