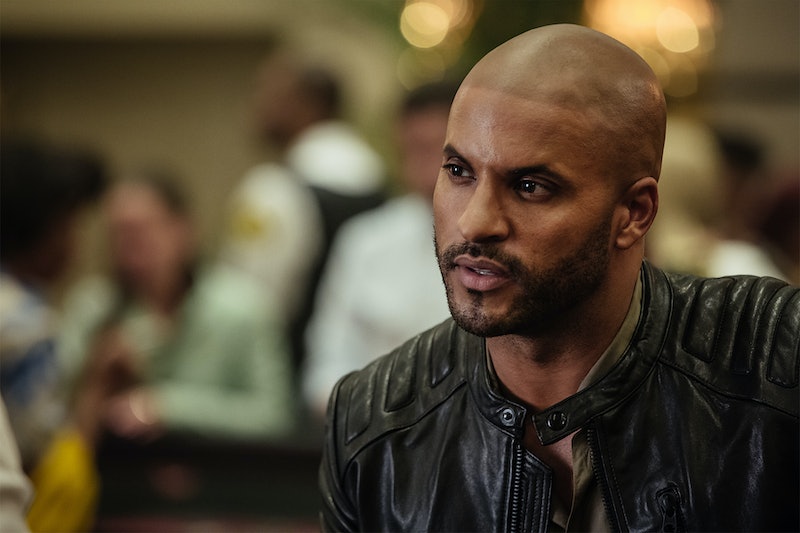 The war between the Old Gods and the New Gods is close to boiling over in the first season finale of the visually sumptuous TV adaptation of Neil Gaiman's classic fantasy novel, American Gods. And caught between the personifications of ancient traditions and modern obsessions is Shadow Moon, the Earth-bound ex-convict played by Ricky Whittle. When we talk over Skype a few days before the season finale airs, the actor marvels at how the 16-year-old text has become "extremely relevant" in 2017 and can continue to be, since co-creators Bryan Fuller and Michael Green have been empowered to add to it. Whittle has an idea for a New God who would call out society's fixation on how things look. I'm with Shadow: Beauty should appear in American Gods Season 2.

"We're so obsessed with aesthetics and what we regard as beautiful," Whittle says. "The fact that no one ever sends a photograph to each other without putting a filter on it. Without editing it. So what would the god of beauty be like? And how would he or she perceive the world?"

It's a hard concept to argue with, especially with someone who came to acting, first in the British soap Hollyoaks, via modeling for brands such as Reebok. Yes, it seems likely that Beauty will eventually get his or her time to shine on American Gods, whether that's in its sophomore season or in any of the "numerous years" that the actor hopes he'll be working on the show.

And so far so good on that front. When we connect, it's the end of my day and the beginning of his. He's halfway around the word — in Australia to do more press for the Starz series — and though his answer to "How are you?" is "Jetlagged," the actor quickly follows that up with an expression of gratitude for the adaptation's success. "I call it First World problems," Whittle laughs.

And they're well-earned problems, too. Whittle famously was the last actor standing after a five-month search for Mr. Wednesday's stoic body man, so he's had plenty of time to develop his portrayal of one of the most famous characters in modern fantasy literature. He says that his respect for and understanding of Shadow often led to him tamping down his actor-ly instincts to be "the action man," "the funny man," and "to push the story forward."

"Because I know where I want Shadow to be, so I’ve had to work backwards to create this empty void... this broken man, who’s void of personality, of emotion," the actor offers. "He doesn’t even cry at his wife’s funeral. He’s not very jokey. He lacks a personality, but it’s something I want him to earn. It was a big risk ... I was confident enough that we were gonna go for numerous years and I was able to play out this journey where Shadow gets stronger, he earns his personality back, he gets more confident as he starts to realize the world he’s been awoken to."

Spoilers for American Gods' season finale will follow. Of course, in the final episode of the first season, Shadow learns the true identity of the strange man who offered him employment on his first day out of prison. He's been road-tripping with Odin; he's been to a garden party with multiple incarnations of Jesus; he's had intense conversations with his dead wife, and he's been saved from near death himself — that would be enough to give anyone their fire back, and Whittle is "looking forward to Season 2 and 3, where I’m gonna get Shadow to grow both personally and give him more confidence with the gods and around the gods and maybe even challenge the gods now, now that he’s aware of them."

And as Shadow becomes more comfortable with his extraordinary surroundings, American Gods can continue to expand its cultural commentary. While the first season show prompted plenty of thinkpieces with a graphic and poetic love scene between two Muslim men, Mr. Nancy's prophetic speech about discrimination and police brutality to African slaves in transit to the states, and more bold and timely content, Whittle is quick to give all credit for the narrative's continuing importance to Gaiman.

"The themes throughout the show, in immigration, religion, racism, women’s rights, homophobia... all these different things — gun control — these are just in the book," Whittle says. Though he points out the character of Vulcan (Corbin Bernsen) — a new member of the American Gods pantheon, who shines a light on America's fervent gun culture — as an example of how the show can successfully build on its literary base.

"So [the series] really can go in leaps and bounds and touch on all kinds of important themes like we have done, but we need to keep in the headlines. We need to keep these conversations going," he reasons. He also reminds me that Gaiman is penning the long-awaited American Gods sequel novel "as we speak."

How that literary sequel and the series will inform one another remains to be seen, but American Gods fans have to be looking forward to hearing more from their favorite original characters in both formats. The series has already beefed up the roles of Mad Sweeney, Laura, Media, Mr. Nancy and more — a luxury of both time and a dream of a cast list.

"[Those characters] are going to be featured a lot more in the show than they are in the book because we have these incredible actors," Whittle says. He mentions them by name — Orlando Jones, Gillian Anderson, Yetide Badaki, and so on — several times during our discussion. "So we’re going to use them."

So if Fuller and Green are into Whittle's pitch for a new New God, the actor playing Beauty might be the next casting news that sets Twitter ablaze. It's an ironic prospect, since Whittle describes his bosses as being practically devoid of vanity, and always eager to take the "best idea" over their own. That's a 180-degree pivot from the way he described The 100 showrunner Jason Rothenberg to The Hollywood Reporter in the aftermath of Whittle's unceremonious exit from the show in 2016. The actor claimed that Rothenberg "abused his position to make [Whittle's] job untenable" and "professionally bullied" him. (In his response statement, the showrunner did not address the allegations, but called Whittle "a talented actor" and expressed good wishes for his future.)

"I have leaders, not bosses," Whittle answers when I ask how his American Gods experience has been different from his tenure on the post-apocalyptic CW drama. "I feel like I would go to war for Bryan Fuller and Michael Green."

The co-creators probably won't ask that of their star, but Shadow Moon? That's another story. He's headed to the heart of the action in American Gods Season 2.