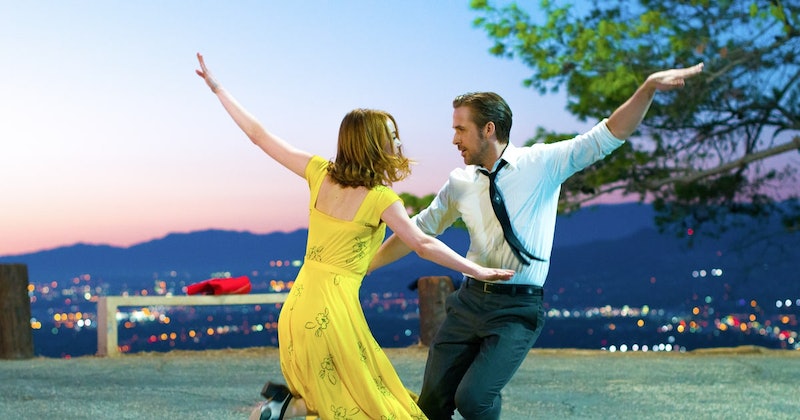 I’m always in the market for a big, sweeping Hollywood musical,so you can imagine my delight when La La Land turned out to be a runaway hit. Ryan Gosling and Emma Stone are so charming, and Damien Chazelle’s writing and directing are top-notch, so it’s not hard to believe that everyone else in Hollywood is loving it, too. It’s nominated for Best Picture — Comedy or Musical at the 2017 Golden Globes, and some in Hollywood say that the Golden Globes are a surefire prediction of what’s going to be nominated at the Academy Awards. Will La La Land win Best Picture at the 2017 Oscars?

The Hollywood Foreign Press Association (who votes for the Golden Globes) and Oscar voters love a big musical — I think it reminds them of the days when Hollywood was glamorous and over-the-top and put out a musical like that once a year. Now, it seems like it’s once every five years. It's no surprise that La La Land took home the Best Picture — Comedy of Musical statuette at the 2017 Golden Globes. Musicals are great Best Picture fodder because they involve equal amounts of artistic credibility and commercialism. Musicals are crowd pleasers, but they still feel like hard enough work to give awards to. It’s not like a Michael Bay explosion machine — it’s not easy to write music and lyrics and choreograph scenes and have it all come together so seamlessly.

In a word, I think yes — La La Land will take home the Best Picture Academy Award. The movie is nostalgic, it's fun, and most importantly, perhaps, it's light-hearted. With so much negativity going on in the world right now, I think that audiences are looking for escapism, and La La Land is just the movie to engross viewers and make them feel happy, if only for two-and-a-half hours.