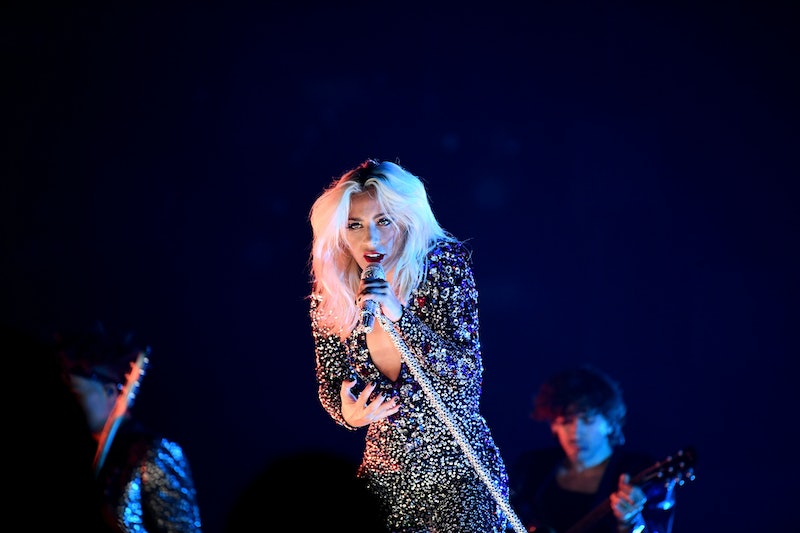 By now, you've probably already put Lady Gaga and Bradley Cooper's "Shallow" on replay about a million times. (Or maybe that's just me?) Regardless, you're probably wondering whether there's a chance for you to hear the award-winning track and other classic hits live, right? So, will Lady Gaga go on tour in 2019? You might have to travel a bit to see the superstar in person.

Unfortunately for all of her Little Monsters out, there are currently no plans for Gaga to travel around the country on tour. However, there is a way for you to see the singer live in concert, if you want to travel, that is. Gaga is currently in the middle of her residency in Las Vegas, in which she's performing her hits for two different kinds of performances. Not only is the "Just Dance" singer performing many of her pop-friendly hits for the Lady Gaga Enigma show, she also has a few jazzy, stripped down performances called Lady Gaga Jazz & Piano.

There are still tickets available for some of Gaga's upcoming performances, with the next one being on May 30. And while you have some time left to purchase tickets for some of her 2019 shows (which are scheduled through November), you'll likely want to act fast, as some of her shows are already sold out (namely the packages for the full Lady Gaga Vegas Experience i.e. both of the Enigma and Jazz shows).

Gaga already kicked off her Vegas residency in late December, as Variety reported. Naturally, she's already performed her award-winning song, "Shallow," alongside her A Star is Born costar, Bradley Cooper. According to the Hollywood Reporter, her duet partner surprised the audience during the Jan. 26 performance of her Vegas show. Cooper pulled off his best Jackson Maine once again as he held his own with the superstar, who played the piano during their rendition.

The singer previously revealed that she was set to have a Vegas residency in December 2017. In her announcement, which she posted via Twitter, she opened up about just how much the enigmatic move meant to her. She wrote:

"The rumors are true! I will have my own residency at MGM’s Park Theater. Get ready for a brand new show!! It’s been my lifelong dream to be a Las Vegas girl, I’m so overjoyed! LOVE YOU LITTLE MONSTERS WE DID IT, MEET ME IN Las Vegas!! #LasVegasGoesGaga"

According to Fortune, Gaga detailed in a statement exactly how special this Vegas move is for her. “It’s the land of Elvis, Tony Bennett and Frank Sinatra, the Rat Pack, Elton John, Judy Garland and Liza Minnelli. It has been a life-long dream of mine to play Las Vegas,” she said, and added, "I am humbled to be a part of a historical lineup of performers, and to have the honor of creating a new show unlike anything Vegas has ever seen before."

Given the overwhelmingly positive reviews of the Lady Gaga Vegas Experience, it sounds like Gaga really did create an awe-inspiring show. So, just in case you're clamoring to see the superstar in person, you might want to head on over to Las Vegas to see the talented superstar in action.