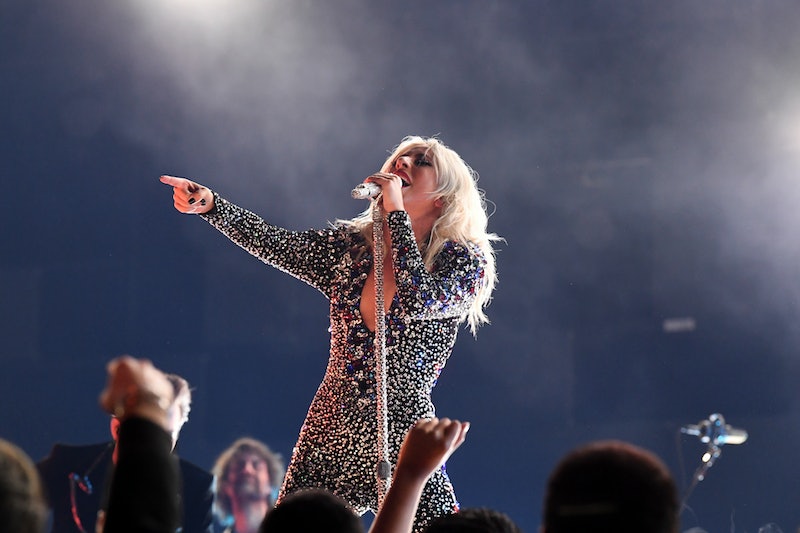 Bradley Cooper might not have been at the 2019 Grammy Awards, but his A Star Is Born co-star didn't need any help to get the arena on its feet. Lady Gaga performed "Shallow" at the 61st Grammys, turning the touching duet into a tour de force performance alongside the song's co-writer, Mark Ronson. Gaga — who won two Grammy awards for "Shallow" on Sunday night, both for Best Song Written For Visual Media and Best Pop Duo/Group Performance (plus one for "Joanne" for Best Pop Solo Performance) — rocked a bejeweled catsuit and glittery eye makeup onstage, belting out both her and Cooper's verses with gusto.

In order to capture a little bit of the song's romantic nature, however, Gaga did serenade friend and collaborator Ronson with the second verse. The singer also added some sparks to her performance — literally, setting off plenty of pyrotechnics as she hit the famous high notes during the song's bridge. Gaga's solo version of the Oscar-nominated song earned her a standing ovation from her peers, all of whom were on their feet throughout most of the number.

"I’m not gonna be able to wear any makeup tonight," Gaga tweeted before the show, after the first win for "Shallow" was announced. "We just won our first of Grammy nominations for the night. I’m in tears with honor and gratitude. Thank you @RecordingAcad #Grammys #Grammy and my co-writers." The singer also made sure to shout out Cooper, who was attending the BAFTA awards in London on Sunday night. "And Bradley, I love you so much thank you," she wrote.

Gaga also earned plenty of acclaim for her moving acceptance speech when "Shallow" was awarded the Grammy for Best Pop Duo/Group Performance. “If I don’t get another chance to say this, I just want to say I’m so proud to be a part of a movie that addresses mental health issues," the singer said, referencing Cooper's character's struggle with depression and alcohol use disorder.

"They’re so important. And a lot of artists deal with that and we got to take care of each other. So if you see somebody that’s hurting don’t look away. And if you’re hurting, even if it might be hard, try to find that bravery within yourself to dive deep and go tell somebody and take them up in your head with you," she continued. "I love you. Thank you so much to the Grammys."

While the singer's performance may have stolen the show during Sunday's ceremony, fans can likely expect something much different when Gaga and Cooper perform "Shallow" at the Oscars. In a recent conversation with Entertainment Tonight, Cooper admitted that he's "not at all" ready to sing alongside Gaga, joking, "I'm going to have to prepare a lot," before the show.

Referencing the pair's viral performance at Gaga's Las Vegas residency, Cooper told ET that he's hoping to have a little more time to rehearse before the Oscars. "I didn't have any preparation. That was just to see [what it'd be like]," he explained. "That was an amazing experience. But no, I want to work and like rehearse [before the Oscars]."

There's no way to know what, exactly, the pair has planned for their Oscars performance, but if it's anything like Gaga's show-stopping Grammy's number, "Shallow" will definitely be an award-worthy moment come Feb. 24.