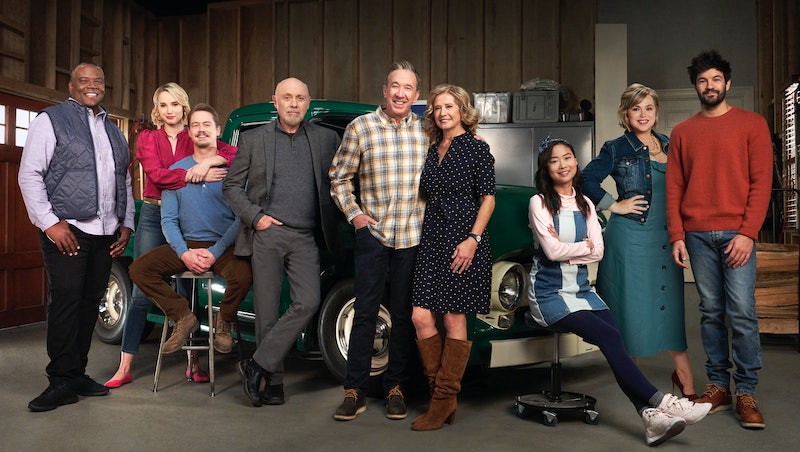 Amid the ongoing pandemic, many TV productions suspended filming in mid March, and as a result, the Last Man Standing Season 8 finale isn't the one that was originally planned. Still, FOX did save the show after ABC canceled it in 2017 and ratings have not dipped much, so it's possible Last Man Standing will return for Season 9 — at the very least, to give the season its intended Season 8 ending. FOX has yet to announce anything, however, and the shifted production schedule may delay any possible renewal news. (In comparison, Season 8 was renewed before Season 7 even aired its finale.)

On March 15, the studio behind Last Man Standing, 20th Century Fox TV, announced it was suspending production of the show amid coronavirus concerns. According to Deadline, the Last Man Standing cast and crew only had two production days left, which included taping the actual season finale on March 17. Though they had planned on simply filming the finale without a live studio audience, the suspension meant that Last Man Standing Season 8 had to end with 21 rather than 22 episodes.

Still, that's not to say that Episode 21, titled, "How You Like Them Pancakes?," is not a fitting cliffhanger for the season. The episode features Kaitlyn Dever's Eve returning home for a weekend visit from the Air Force. Her sudden arrival causes plenty of drama, as people attempt to connect with her and hash some things out before she leaves. This ends up pitting Mike, Vanessa, Ryan, Kyle, and Eve's sisters against each other, as they all end up competing for Eve's attention — which Eve isn't exactly excited about.

"Part of the story is that Eve's been kind of a tomboy and closest to me," Allen explained to TV Guide. "She's almost like me, pushing people away — she runs away from emotion."

Another major plot line that was meant to be in the original finale was Amanda Fuller's Kristin giving birth, and it's not clear how that was incorporated into the new finale. "In the last episode we shot, Kristin's going into labor," Fuller explained to TV Guide. They'd intended for fans to actually see the baby, but the shortened season may mean fans won't get to see the conclusion of Kristin's pregnancy storyline until a potential Season 9 — which of course would give audiences a reason to tune in.

As for what else a possible Season 9 could explore, Fuller said she isn't ruling out a coronavirus storyline. "I can't imagine not addressing it," Fuller told TV Guide. "If we're lucky enough to get a Season 9, I can't imagine skipping it altogether."