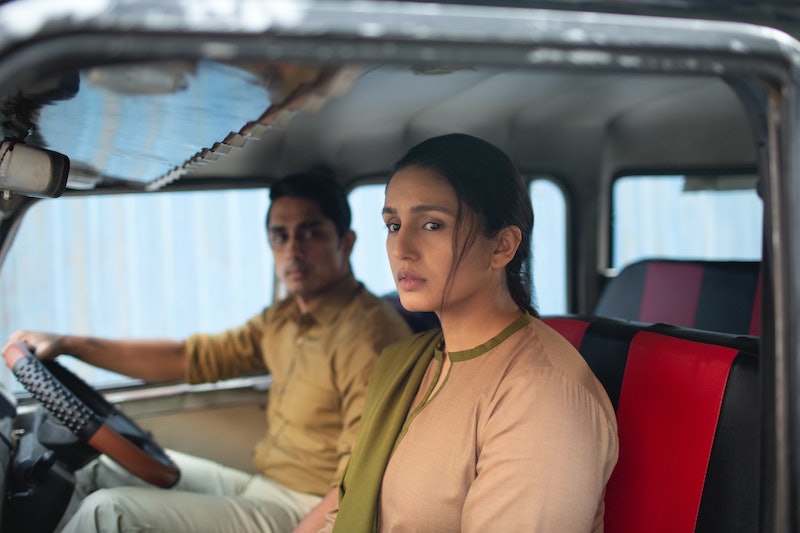 Set in India, Netflix's Leila premieres Friday, June 14 and follows a woman named Shalini (Huma Qureshi) as she attempts to track down her long-lost daughter, Leila. The series — which Netflix says is India's first dystopian story — takes place in a fictional location called Aryavarta. And while the series looks both dark and compelling, there's no news on whether Leila has been renewed for Season 2.

This fictional world, per Netflix, is one "in which there is great suffering, extreme and totalitarian rules of engagement and fictional extremes constructed around an obsession with purity, communal and divisive societal dramas and grit." The compelling setting had many people comparing it to Margaret Atwood's The Handmaid's Tale — now a popular Hulu series in its third season.

Indeed, Leila is based on a book by Prayaag Akbar, but the author brushed off the Gilead comparisons. "Shalini searches for Leila in a very different context, one that is shaped by a number of the most urgent concerns of Indian society," he told The Hindu. "Atwood explores a gendered dystopia, something I would not presume to write. While Shalini suffers a great deal of gendered violence, there are different forces creating her world."

It's clear that Akbar was thinking of the caste system — which is tragically still a problem in modern-day India — when writing Leila. "To my mind, in India we are constantly told who we are," the author said in the same interview. "It doesn't really matter whether we feel this or that or any other. I suppose my experience growing up as a — relatively deracinated — religious minority in Delhi brought this home quite sharply. Much later I began to think what that meant for society. Why it was so important for us to ascribe these minute identities of caste and subcaste to each other."

This plays out in the Netflix series when Shalini marries a Muslim man — or someone outside her community. As a result, her husband is killed, her daughter disappears, and she herself is captured. Thus begins her journey to find her daughter — all while under the watchful eye of Aryavarta. As we learn in the trailer, the government takes away all of the "mixed-blood kids," which is what her daughter, Leila, is.

"What we have managed to do with the show is that we have taken the book as a base and have really given it wings," Leila star Qureshi told The Hindu. "When you watch the show you will be really surprised to see how the series builds on the book. There are certain elements which Prayaag only briefly touched in the book and we have really taken them to the next level. The world that we have built is far more diverse and richer in terms of how the society is."

While it sounds like an impressive feat and a huge get for India, it's unclear whether Leila will return for more seasons. For one, it's set on a singular novel, so if Season 1 follows the narrative arc of the book, it won't have any source material for further seasons. However, that hasn't stopped shows before, with series like Big Little Lies, Game of Thrones, and The Handmaid's Tale forging ahead sans books.

Furthermore, the show just wrapped up filming in April 2019, per India Today, so they'd likely need a while to write a new script and film it before any Season 2 can be released. So whether or not Leila returns or not, it promises to be an exciting season of television and one that sheds light on modern-day political issues.