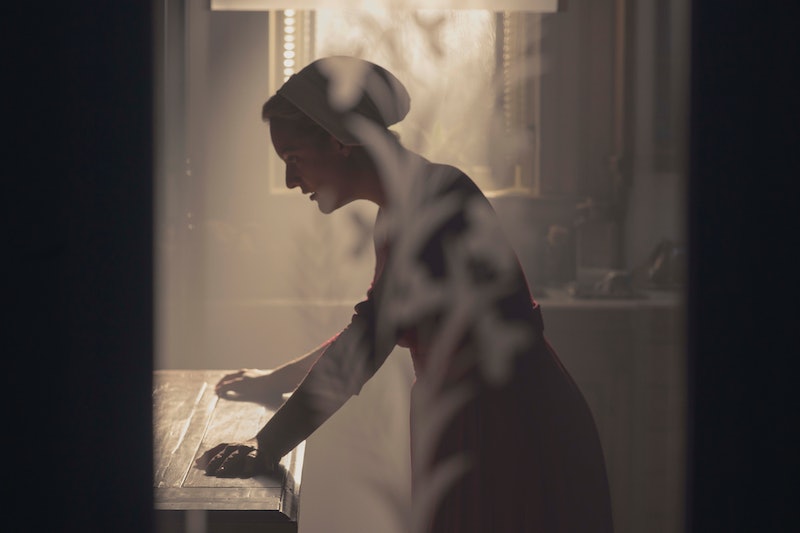 Early on in The Handmaid's Tale, June uses a gradually heating bathtub as a metaphor to describe the way Gilead took away women's rights in a surprisingly short amount of time. The Handmaid's Tale is vague about the timeline, but Season 3 offers more clues as to how long June has been in Gilead. Or, really, how long Gilead has existed. For example, how long after the coup in DC did women lose their access to prescription drugs, and then their bank accounts, and then their jobs and property rights? When June and Luke attempted to run away to Canada with Hannah, they weren't dressed as econopeople, or in any recognized Gilead uniform — they're wearing jeans and modern shoes. All of that seems to have been implemented immediately after. Maybe it hadn't reached her neighborhood yet. When June was taken to the Red Center, it seems like she was part of the first group of Handmaids.

Based on the current ages of Hannah and Oliver in Season 3, the children of June and Emily respectively, it seems that about five years have passed since the the moment the two women became handmaids. The Waterford household was June's second posting, and the Lawrence household is her third. Each handmaid assignment is two years, and Season 1 begins after her second has already started. Some sleuths on Reddit, who examined the newspapers June found at The Boston Globe offices in the middle of Season 2, came to about the same conclusion as well. June had been in Gilead for about three years at the start of the Hulu series, and about two years have past since.

Remember Ambassador Castilo from Season 1? She mentions that a child has not been born in six years in her city and that the fertility crisis that lead to the Sons of Jacob takeover and the emergence of Gilead is widespread. In that episode, we also learn that Gilead has greatly decreased the nation's carbon emissions in three years. It's an odd thing to boast, considering that the colonies are rampant with nuclear waste, but it also helps to give us a sense of the timeline.

So, all signs point to five years — only five short years. Isn't that the scariest thing about The Handmaid's Tale, how quickly and almost seamlessly the United States was replaced with an oppressive new government? Not only was the coup d'etat successful, so many people in Gilead are just going about their business as though this new society is totally normal.

Having said that, there are also plenty of signs of strain and rebellion in Gilead after five years. Season 3 mentions that in places like Chicago, people are still fighting to stop Gilead and other signs of rebellion are mentioned here and there. This can't last forever, right? In the book, there was an Early, Middle, and Late Gilead Period before it fell, but it's not specified how long any of those periods are. June's five years may still be the beginning of this horrific world, but at least she's making steps towards the end.

More like this
On 'The Handmaid’s Tale,' Christine Ko Fights Back
By Gretchen Smail
'The Ex-Wife’s First Look Pics Are Giving 'Gone Girl' Vibes
By Bustle UK
Clayton & Susie Broke Up, Citing "A Significant Amount Of Pain" After 'The Bachelor'
By Jordyn Tilchen
Kendall Jenner Thinks Tristan Thompson "Wanted To Trap" Khloé With Another Baby
By Jake Viswanath
Get Even More From Bustle — Sign Up For The Newsletter