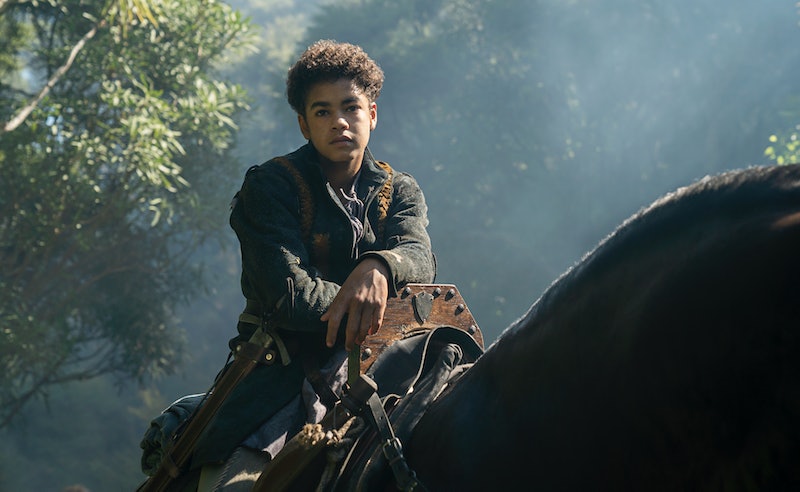 Netflix's new fantasy series, The Letter for the King, follows an aspiring young knight named Tiuri (Amir Wilson) who's tasked with bringing a message to King Unauwen. The show is based on Dutch author Tonke Dragt's 1962 book of the same name. And if Letter for the King returns for Season 2, it will likely follow the events of the 1965 sequel, The Secrets of the Wild Wood.

Whereas the first book introduces audiences to 16-year-old Tiuri and follows his quest to, well....deliver a letter to the king...the second features an older Tiuri. After the events of the first book, he's been knighted and given a new task: finding a missing knight in the titular Wild Wood. "With his best friend and squire, Piak, [Tiuri] must journey into the heart of a terrifying, secret forest realm, where danger is all around and every path leads you astray," the description reads. "It is a place of lost, overgrown cities and ancient curses; of robbers, princesses and strange Men in Green; of old friends and treacherous new enemies — and a secret plot that threatens to bring down the entire kingdom."

Netflix has yet to announce any renewal plans for Letter for the King (and will likely wait until they've had some time to gauge response and interest). However, it seems like the streaming company is currently investing in fantasy content: it released The Witcher, based on the fantasy book series of the same name, in December 2019 and renewed it for a second season before the show even premiered. Though the site has plenty of fantasy series and movies available to stream, its originals in the genre are somewhat lacking. They could be hoping series like Letter for the King and The Witcher will fill that gap.

That being said, reviews for Letter for the King aren't super promising: it currently has a 44 percent critical rating on Rotten Tomatoes. "Lacking urgency and visual splendor, The Letter for the King attempts a high-speed gallop, but ends up flopping on its belly and rolling around a little," wrote The Hollywood Reporter's Robyhn Bahr. But perhaps viewers will feel differently. In the meantime, you could always, you know, read Secrets of the Wild Wood to find out what happens next.